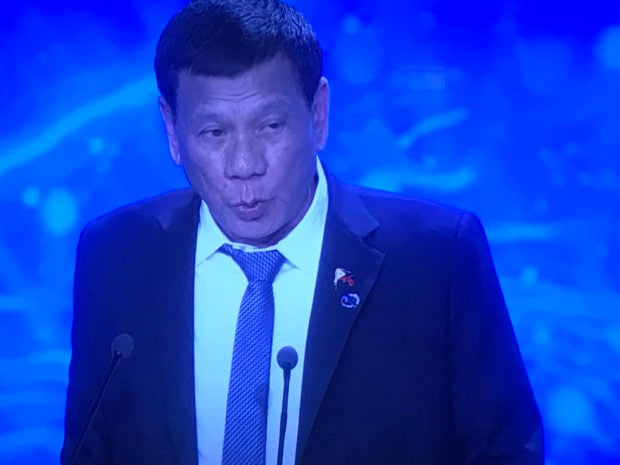 Duterte, who delivered a speech at the annual forum of the Valdai Discussion Club on Thursday, said “some of our partners have hurled unfair criticisms against my government about perceived excesses in our fight against drugs.”

“They see what they want to see to justify their preconceived notions, and not trying to understand that what truly is happening there in my country,” he said.

“Is this how friends treat each other?” he added.

Before this, Duterte took a swipe at “some so-called friends” who he said “act like they know the answers to our problems and impervious to our [specificities] socio-economic and political conditions.”

“They create rules and norms for almost everyone, and some refuse to be bound by the same. Think of the (United Nations Convention for the Law of the Sea), the Paris Agreement on Climate Change, and even the Convention on the Rights of the Child,” he said.

“They weaponize human rights oblivious to its damaging consequences to the very people they seek to protect. Just look at the chaos and instability that ensued in Libya and Iraq following military interventions,” he added.

He then justified the drug war, saying that his administration only “seek[s] to protect our republic [from] those who wish to tear it apart.”

“We only seek to curb criminality that corrodes the very structure of government,” he said.

Duterte then stressed that the Philippine government only seeks “to build a credible defense against those who might be tempted to violate our territorial integrity.”

“Is this not something that all nations are entitled to? Is this not what democratically elected governments are mandated to do?” he further said.

“And they clip our wings making it more difficult for us to effect meaningful change for our people,” he added.

He further lamented what he called “misguided and self-serving crusades of the few.”

“Now let me ask you this. In what universe is this right, justifiable, or fair? Nowhere but in the self-contained bubbles of some societies that had the luxury of developing first,” he said.

“We are tired of the misguided and self-serving crusades of the few. It is time that they are challenged,” he added.

Duterte, however, said he was not referring to the United States or other western nations.

“The US is a close friend of the Philippines – in fact, our only treaty ally. We have deep ties with the American people, forged by shared history and nourished by common values. America certainly can offer so much more [to] the world,” he said./ac