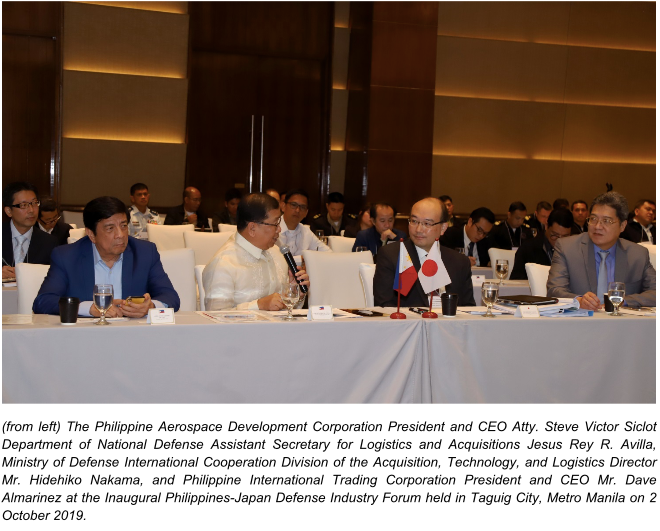 Photo from Department of National Defense

MANILA, Philippines — The Philippines and Japan held their inaugural defense industry forum in Taguig City on Wednesday, an event which aims to explore defense equipment cooperation between the two countries.

The forum, hosted by the International Cooperation Division of the Acquisition, Technology and Logistics Agency of the Ministry of Defense of Japan, allowed the attendees to exchange experiences in policies and procedures related to procurement and export of defense equipment, material and technologies; and check out potential areas of collaboration.

Department of National Defense (DND) Usec. Cardozo Luna said the event was beneficial to the Armed Forces of the Philippines because it would allow “to transition itself to a credible and professional defense institution,” as it expands “the competitive alternatives for AFP modernization projects” when they learn about Japan’s defense technologies.

“We, at the Department of National Defense, fully support the recent amendment of Japan’s Self-Defense Force Act that would allow the Japanese Government and its Ministry of Defense ‘the needed flexibilities’ for the Japanese military force to play ‘a greater or increased role’ in maintaining peace and stability in the Asia-Pacific region by exporting quality defense equipment to foreign countries, like the Philippines,” he said.

In 2016, the two countries signed a defense agreement that would allow the transfer of defense equipment and technology from Japan to the Philippines as part of their growing security partnership amid China’s military build-up and expansive maritime claims.

Japan has the same defense agreement with United States and Australia, but the Philippines was the first East Asian country that it entered into an agreement with.

Both Japan and the Philippines have a separate territorial dispute with China over the East China Sea and South China Sea.  /muf