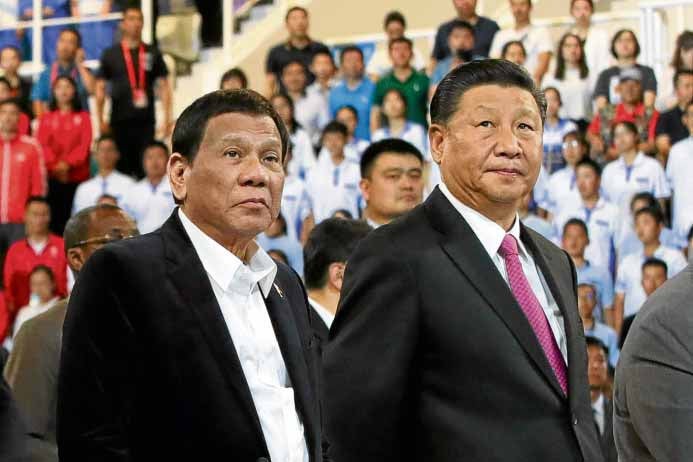 MANILA, Philippines — President Rodrigo Duterte said on Tuesday that Chinese President Xi Jinping had offered the Philippines a controlling stake in a proposed joint energy venture in the West Philippine Sea if it would set aside an international arbitral ruling award that went against China.

The President said Xi told him during their meeting in Beijing in August that if he ignored the 2016 ruling of the UN-backed Permanent Court of Arbitration, China would agree to be the junior partner in the proposed joint venture to develop gas deposits in Recto Bank, located in the West Philippine Sea, waters within the Philippines’ 370-kilometer exclusive economic zone (EEZ) in the heavily disputed South China Sea.

“Set aside the arbitral ruling,” the President told reporters in Malacañang, quoting Xi. “Set aside your claim. Then allow everybody connected with the Chinese companies. They want to explore. If there is something, they said, we will be gracious enough to give you 60 percent, only 40 percent will be theirs. That is the promise of Xi Jinping.”

But Foreign Affairs Secretary Teodoro Locsin Jr. refuted the President’s statements on Wednesday, saying China did not attach such a condition to the proposed joint exploration deal.

“I read everything he told President Xi. China has never made setting aside the arbitral award a prerequisite to anything,” Locsin replied to a reporter’s question via Twitter.

“On the contrary, China agrees with the Philippines to disagree on their respective claims,” Locsin said.

He said the memorandum of understanding that he signed with Chinese Foreign Minister Wang Yi “applies only in disputed areas, not in areas everyone, including China, admits belongs to the Philippines.”

Locsin cited Justice Menardo Guevarra’s legal opinion that the memorandum did not compromise the Philippines’ sovereignty in the West Philippine Sea.

“Can’t help it if traitors try to put a treasonous spin to it. But it’s [OK], one day they’ll be assassinated with impunity; indeed to loud acclaim,” Locsin said.

After Xi’s visit to the Philippines in November last year, Guevarra vouched for the legal soundness of a joint exploration deal, saying there was no need for the Senate to ratify it because it was not a treaty.

“There are no sovereignty issues whatsoever as the [memorandum of understanding] merely expresses a mutual desire to agree on specific cooperation arrangements within 12 months,” Guevarra said in December.

He said the agreement expressly stated that it “shall be without prejudice to the respective legal positions of the two governments and does not give rise to any rights or obligations under international or domestic law.”

China’s embassy in Manila had no comment on Wednesday on President Duterte’s remarks.

The tribunal in The Hague clarified maritime boundaries and the Philippines’ sovereign entitlements, and in doing so, invalidated China’s claims to nearly the entire South China Sea.

China, which did not take part in the arbitration, does not recognize the ruling.

The President has sought to befriend Xi, hoping to secure billions of dollars of investment, avoiding challenging China over its activities in the South China Sea, including its militarization of seven artificial islands.

Any agreement to forget the arbitral award and team up with China would be a major setback to other claimants, especially Vietnam and Malaysia, which like the Philippines have experienced repeated challenges from China’s coast guard inside their EEZs.

The United States has called that bullying and coercion aimed at denying rivals’ access to their energy assets.

The President did not say if he had agreed to Xi’s offer, but said part of the arbitral award that referred to the EEZ “we will ignore to come up with an economic activity.”

The Hague tribunal said the Philippines had legal rights to exploit gas deposits that China also claims at Recto Bank, located about 140 km off the Philippine coast and internationally known as Reed Bank.

The Philippines’ only accessible gas resources at Malampaya fields, off Palawan province, are set to run out by 2024.

A joint project with China has been talked about for decades, but has gone nowhere because of their competing claims.

Joint activity could be deemed as legitimizing the other side’s claim, or even relinquishing sovereign rights.

Locsin said in a television interview on Wednesday that a preliminary agreement between China and the Philippines would avoid stating which country was entitled to the gas.

“It’s very clear — no legal position is compromised if we enter into this agreement,” Locsin said, adding that putting aside the arbitration case was immaterial because the Hague court had already made its decision.

“It’s final and binding,” Locsin added. —Wth a report from the wires