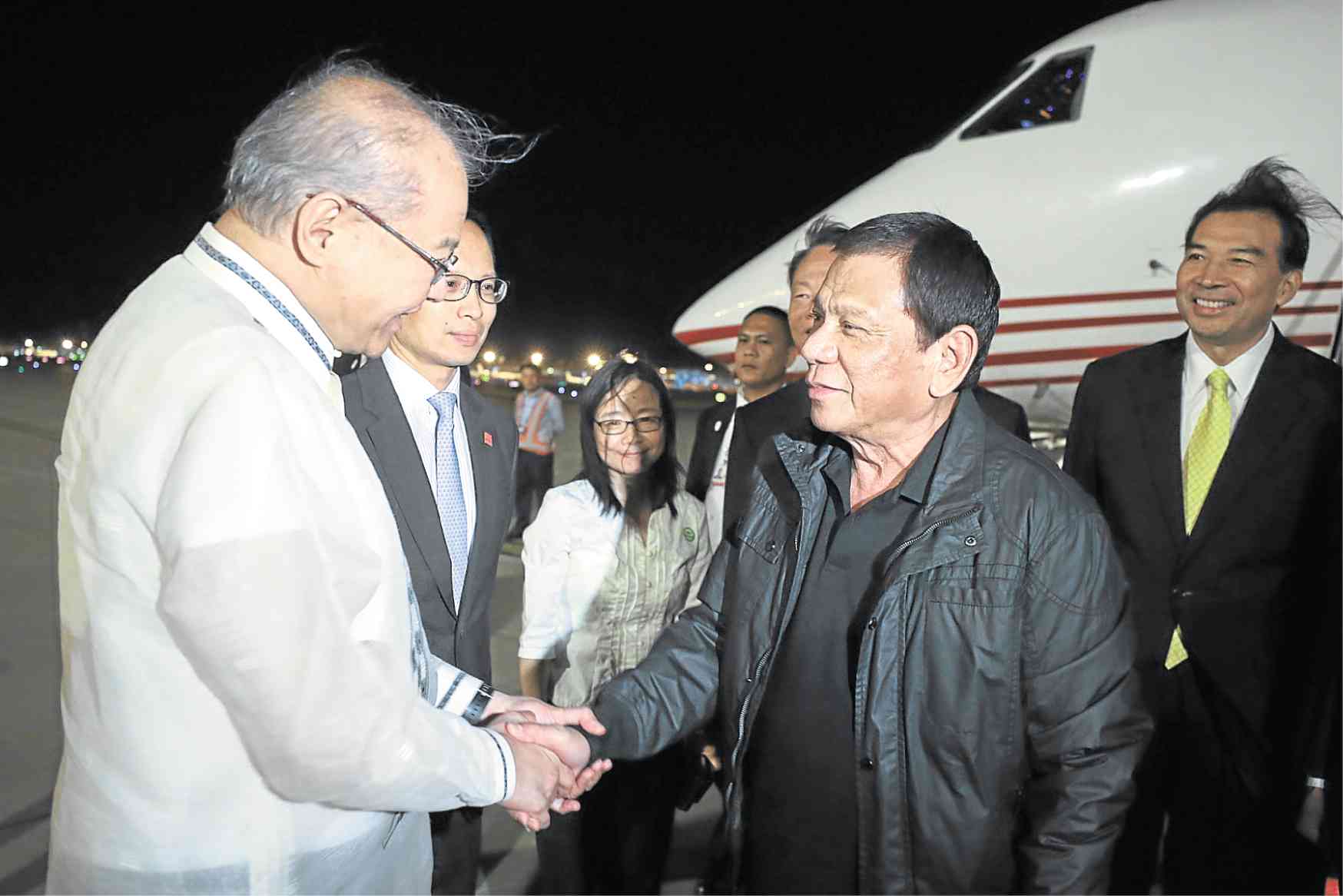 POGO CONUNDRUM Philippine Ambassador to China Jose Santiago Sta. Romana (left), shown here welcoming President Duterte at Beijing Capital International Airport on Aug. 28, says the President was ready to clarify with Chinese leader Xi Jinping the legality of Philippine gaming offshore operators (Pogos) that cater to bettors from mainland China. Gambling, whether online or offline, is illegal in China but not in the Philippines, the diplomat says. -MALACAÑANG PHOTO

BEIJING—China cannot order the Philippine government to shut down online gaming companies catering to Chinese citizens, Philippine Ambassador to China Jose Santiago Sta. Romana said on Thursday, as he acknowledged that their closure would adversely affect the Philippine economy.

“They can’t dictate on us. Those are sovereign decisions. That is where we stand,” Sta. Romana said at a press conference here.

The Chinese foreign ministry on Aug. 20 called on the Philippines to ban all online gaming involving Chinese citizens, saying that “online gambling is a most dangerous tumor in modern society.”

While expressing thanks to the Philippine government for suspending the issuance of new licenses to Philippine gaming offshore operators (Pogos), the foreign ministry urged the government to do more and ban all online gambling.

It also asked the Philippine government to jointly tackle criminal activities, including online gambling and cybercrime.

Beijing has outlawed all forms of gambling, but mainland Chinese have been able to place small bets through online gambling, such as the ones operated by Pogos.

Sta. Romana said President Duterte was ready to clarify in his bilateral meeting with Chinese President Xi Jinping on Thursday night the legality of Pogos that cater to bettors from mainland China.

“For me, I think the key is for the President to be ready to explain. It will have an economic impact on us,” he said.

“So if we are to do it, we want a soft landing. We don’t want a drastic impact that will  adversely affect our economy,” Sta. Romana added.

The online gaming business in the Philippines has become a multibillion-peso industry in just two and half years.

Philippine Amusement and Gaming Corp. (Pagcor) has earned P11.9 billion from the Pogo industry over the past two years and is expected to earn P8 billion this year.

For its part, the Bureau of Internal Revenue aims to collect P2 billion in income tax from Pogos and their workers every month and P1.25 billion in valued-added tax from the workers’ spending.

Real estate companies and condominium owners are the biggest winners in the private sector. They have earned P20 billion in rent from Pogos and their workers over the past two years, according to Pagcor chair Andrea Domingo.

“That’s not rejecting. It’s explaining the difference [between our domestic laws],” he said.

The ambassador pointed out that Mr. Duterte himself had initially mentioned that Pogos were legal since they had secured licenses from the regulator Pagcor.

Pagcor has licensed 58 online gaming service providers that employ an estimated 138,000 Chinese workers. Another 40,000 workers from China are believed to be working in unlicensed operations.

The mushrooming of Pogos in Metro Manila and nearby provinces, however, have raised national security concerns. Defense Secretary Delfin Lorenza has pointed out that many Chinese-manned gaming establishments were near military and police camps.

The rise of online gambling also coincided with the arrival of illegal Chinese workers in the country and the surge in crimes targeting them.

Sta. Romana said officers from the Anti-Kidnapping Group of the Philippine National Police visited Beijing two weeks ago and discussed with their counterparts the abduction of Chinese citizens in the country.

He said some of the kidnappings were connected to online gambling involving Chinese and Filipino criminal syndicates.

“So both are interested to crack down on this. That’s an area of commonality. The difference is that in China, gambling, whether online or offline, is illegal. In the Philippines, it is legal,” Sta. Romana said.

The Bangko Sentral ng Pilipinas and the Anti-Money Laundering Council, meanwhile, are studying the activities of online gaming companies to allow policymakers to come up with a response to criticisms against the industry.