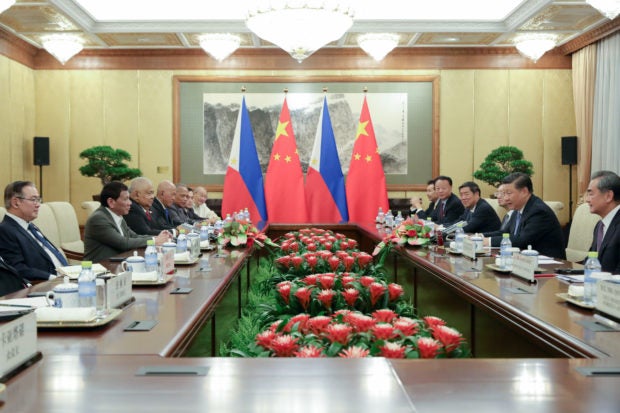 BEIJING- President Duterte wants to hasten the implementation of the memorandum of understanding (MOU) for the joint development in the South China Sea between the Philippines and China during the last half of his six-year term, according to Philippine Ambassador to China Jose Santiago Sta. Romana.

Speaking with reporters here on Thursday, Sta. Romana said both parties would have to sit down and create joint steering and working committees to put into motion the terms of reference that the representatives of two countries had agreed to adopt.

He said private firms from both China and the Philippines would also be composing the joint entrepreneurial working committees to harmonize the development activities identified in disputed areas and recognized Philippine territories in the South China Sea.

“It’s very important for the Philippines. The basic issue here is if you look at the big picture, it’s really one of energy security,” Sta. Romana said.

“Malampaya is running dry and it’s going to affect our power supply,” he said, referring to the Malampaya natural gas fields off Palawan province.

“That’s why the President is moving with a sense of urgency to move the process forward especially in his last three years,” he added.

Mr. Duterte flew here on Wednesday night for a five-day official visit. He was set to meet with Chinese President Xi Jinping on Thursday night to talk on a wide range of issues, including the Philippines’ victory over China in the international arbitral court.

Sta. Romana said the establishment of joint steering and working committees would provide a framework to start the cooperation in searching for oil and other economic developments in the South China Sea, an expansive waterway that China had been claiming as its own.

The Duterte administration, he added, would have to steer clear of limitations spelled out in the 1987 Constitution and the UN Convention on the Law of the Sea (UNCLOS).

“But if you look at the MOU, there is a statement there that (while) we follow the spirit of the UN Charter, UNCLOS (and) international law… both sides will proceed without giving up their legal positions on certain issues,” he said.

“We are trying to find a way within certain parameters to move forward. And so far it would take a lot of flexibility and pragmatism on both sides. A lot of this will be through discussions, negotiations and consultations,” he noted.