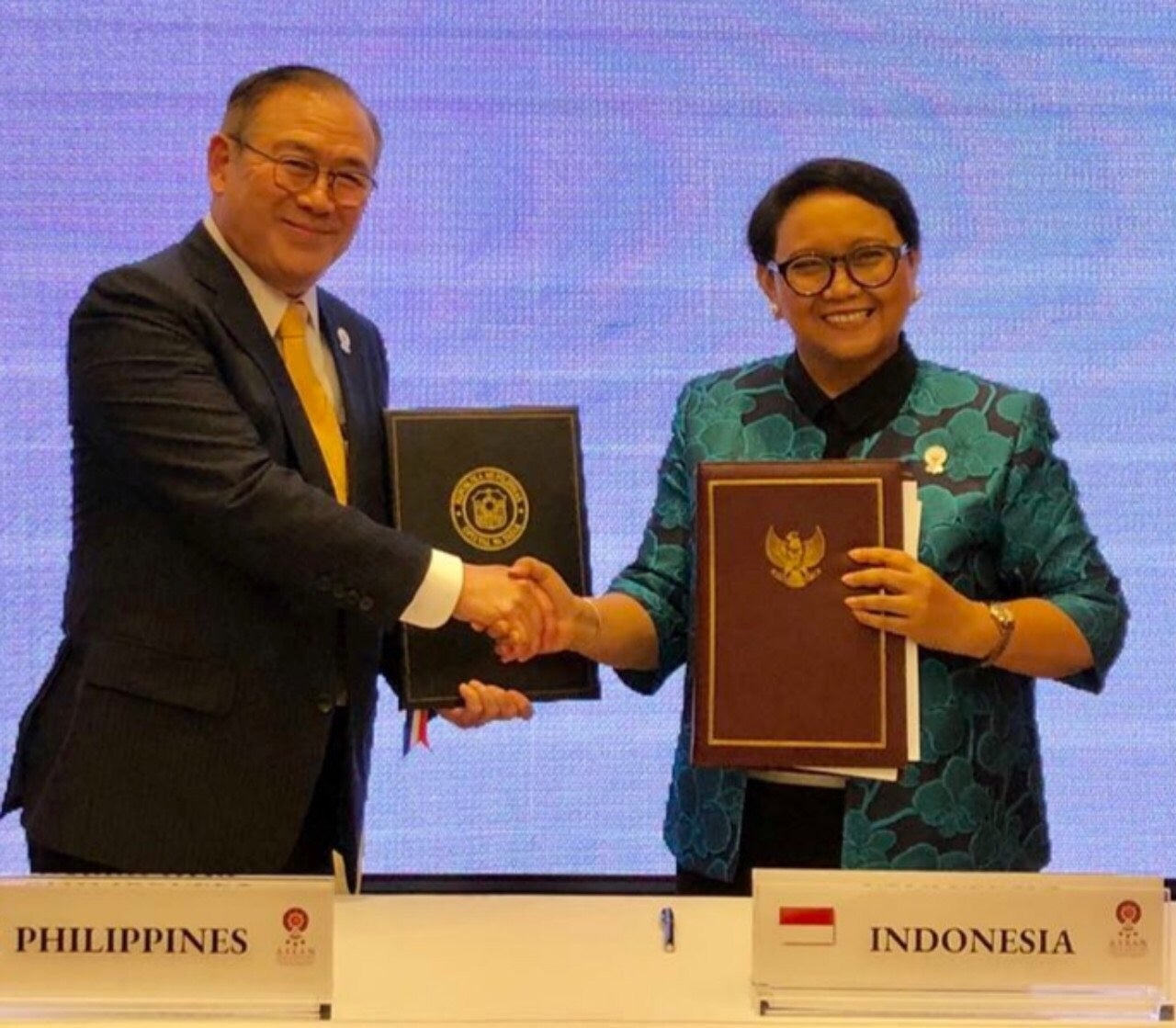 Philippine Foreign Affairs Secretary Teodoro Locsin Jr. and Indonesian Foreign Minister Retno Marsudi share a handshake after signing the Protocols of Exchange of the instruments of ratification concerning the delimitation of the exclusive economic zone between the two countries. Photo by Anthony Cornista/DFA

MANILA, Philippines — The Philippines and Indonesia will start the official recognition of the boundaries that demarcate the  two countries’ overlapping exclusive economic zones (EEZs) after an agreement that was formally signed by the two archipelagic states in May 2014 in Manila entered into force.

In a statement, the Department of Foreign Affairs (DFA) said the agreement entered into force after Foreign Affairs Secretary Teodoro Locsin Jr. and Indonesian Foreign Minister Retno Marsudi signed the Protocols of Exchange of the instruments of ratification concerning the delimitation of the countries’ EEZs.

The special ceremony took place on the sidelines of the 52nd ASEAN Foreign Ministers Meeting on Thursday (August 1) in Bangkok, Thailand.

According to the DFA, the treaty would economically and politically benefit both countries “by promoting more bilateral cooperation in the EEZ in order to advance the common interest of managing and preserving the resources in the EEZ.”

It would also “further strengthening maritime security cooperation between the two countries,” the DFA added.

The treaty determining the boundaries which delimit the overlapping EEZ of the Philippines and Indonesia was first discussed in June 1994.

“Wide overlaps in the EEZ of the Philippines and Indonesia, which run across the Mindanao Sea and Celebes Sea, and in the southern section of the Philippine Sea in the Pacific Ocean, required the two countries to negotiate and agree on a shared boundary,” the DFA explained.

President Rodrigo Duterte and the Indonesian Parliament signed the agreement in February 2017 and April 2017, respectively.

The Senate then concurred with the President’s ratification in June 2019.

With the Philippines and Indonesia both being parties to the 1982 United Nations Convention on the Law of the Sea (UNCLOS), the two nations are entitled to an EEZ of 200 nautical miles off its coast.

The DFA cited the UNCLOS which says that states “have sovereign rights to explore and exploit, and conserve and manage natural resources, among others, within their EEZ.”  /muf