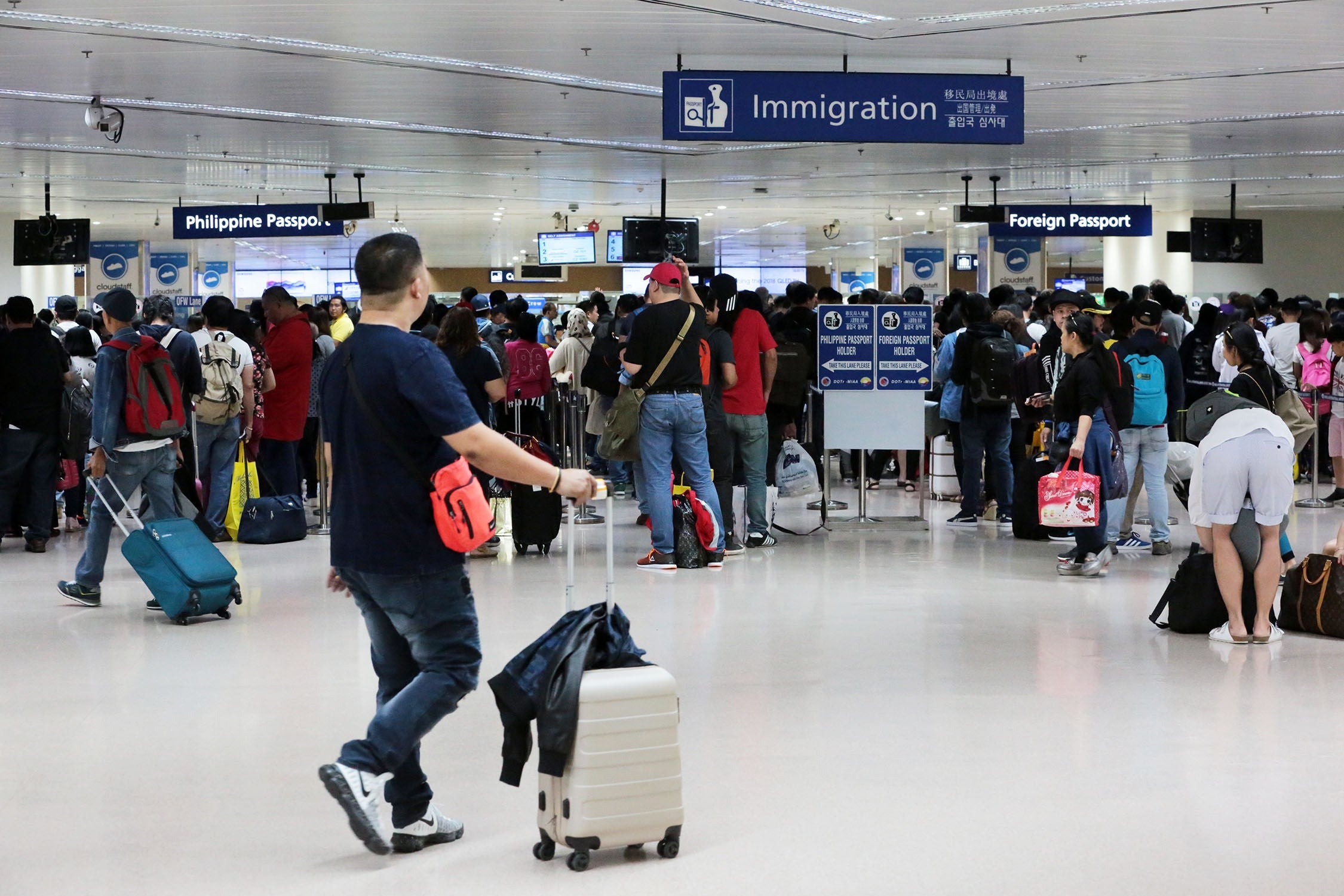 SECURITY CONCERN The visa-upon-arrival privilege enjoyed by Chinese nationals may soon be withdrawn by the Philippine government amid concerns that their entry in large numbers into the country—including those who are undocumented—may pose a security threat. —INQUIRER FILE PHOTO

Malacañang is supporting Foreign Secretary Teodoro Locsin Jr.’s proposal to end the visa-upon-arrival privilege for foreigners amid an influx of Chinese nationals, including undocumented ones, who may pose a security threat.

There are also concerns that the foreigners, especially the Chinese, are taking jobs that Filipinos can handle.

Chinese nationals from the mainland have been arriving in droves since 2017, with many of them working for Philippine offshore gaming operators (Pogo) and other “emerging industries.”

Presidential spokesperson Salvador Panelo on Thursday pointed out that the government was concerned about the entry of foreigners who may be undocumented or who pose a security threat.

Panelo cited the need for a strict vetting process for foreigners wanting to come here, but said the final decision remained with President Duterte.

The President would consider the proposal of Locsin, he said. “[A]nd if we don’t hear anything from him [the President], that means that will be the policy of the government.”

Locsin on Wednesday called for an end to the government’s visa-upon-arrival program for foreigners.

“[A]ll visas should be issued by consular offices after vetting. We must take extra care in outsourcing any part of the visa application process, picking only the most reputable worldwide,” the foreign secretary said on Twitter.

He pointed out that due to the visa-upon-arrival schemes, foreigners visiting the country but not yet screened by Philippine consulates were being allowed into Philippine territory.

“Planes have passengers without visas thereby incurring United States [Department of] Homeland Security wrath. We have to stop stamping visas on slips of paper rather than foreign passports. We need a new visa stamp,” he said.

The Bureau of Immigration started issuing visas to Chinese nationals in 2017 upon their arrival in the Philippines in order to draw more tourists from China.

More than 3 million Chinese have arrived in the country over the past three years, according to the Bureau of Immigration.

From 100,000 to 130,000 of them are registered workers in Pogos or offshore gaming companies that facilitate online gaming exclusively for foreigners outside the Philippines via the internet. Thousands more are believed to be illegally working in the sector.

“If they are undocumented, then we should really raise concern about them. How do they manage to come here?” Panelo said.

He said the foreigners were violating immigration laws if they were staying in the country to work. “It’s easy to solve that. We’ll just expel them legally.”

Justice Secretary Menardo Guevarra on Thursday said a “more stringent” implementation of immigration, labor and security regulations would be needed to address concerns about the influx of illegal Chinese nationals.

“There is cause for alarm if Chinese nationals, or any foreign nationals, for that matter, are getting employed in industries where more than enough Filipino workers are available,” Guevarra said in a statement.

He said there were also concerns when foreigners, including Chinese nationals, were coming in as tourists but with intentions that pose a threat to national security.

“As long as the Chinese come to the Philippines with proper documentation and appropriate visas, “there should be no problem,” Guevarra said.

“We surely welcome them as tourists. If they wish to work here, they should comply with all legal requirements such as securing alien employment permits and work visas, and they should pay income taxes,” he added.

He reminded visitors that they should obey Philippine laws and ordinances, and conduct themselves properly. “Otherwise, they shall be asked to pack up and leave, without prejudice to any civil or criminal liability.”

Earlier, National Security Adviser Hermogenes Esperon Jr. said the influx of Chinese nationals into the country might pose a security threat, since some of them might be undocumented.

But Interior Secretary Eduardo Año said their presence was no cause for concern.

In an interview at Camp Aguinaldo on Thursday, Año said there had been no concrete case of espionage related to the Chinese arrivals.

He made the remarks after two groups of Chinese tourists were caught taking pictures inside the Tide Pole naval facility in Parola, Barangay Bagong Silang, in Puerto Princesa City on July 23.

The Naval Forces West, which is based in Puerto Princesa, has asked the city tourism office to keep tourists from military facilities.

Año viewed the threat as speculative and “Cold War sentiment.”

“We should always be on guard because national security is our priority, but we should also be basing our speculations or our observation [on] concrete evidence,” he pointed out.

He said the influx of Chinese tourists was good for the country as they tend to invest in property here. —WITH A REPORT FROM JEROME ANING

Read Next
IN THE KNOW
EDITORS' PICK
Smart poised to turn PH into ‘Smart 5G country’ with nationwide rollout
Trump, Biden head into first debate with presidency on the line
Water remains our saving grace right now
Get 80% OFF Ignite 2020 Cyber Tickets starting 28 September
Palace slams Facebook over ‘censorship’: ‘Why only take down pages supportive of gov’t?’
Philippines extends coronavirus curbs for another month to prevent ‘Christmas surge’
MOST READ
‘I offered to resign’ because of endless corruption, says Duterte
Duterte keeps Metro Manila under GCQ for entire October
‘Psychic numbing’: When people stop giving a damn about the pandemic
AMLC investigator says De Lima not involved in Bilibid drug trade
Don't miss out on the latest news and information.

Trump, Biden head into first debate with presidency on the line

Palace slams Facebook over ‘censorship’: ‘Why only take down pages supportive of gov’t?’

‘Psychic numbing’: When people stop giving a damn about the pandemic

Palace slams Facebook over ‘censorship’: ‘Why only take down pages supportive of gov’t?’