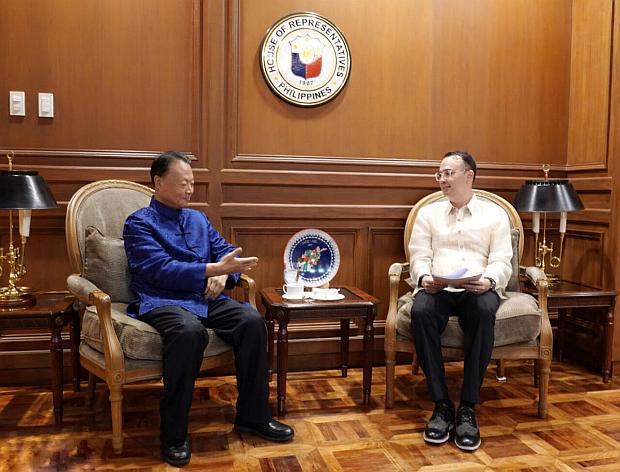 MANILA, Philippines — Three Chinese officials have congratulated new House Speaker Alan Peter Cayetano and vowed to work with the lawmaker to deepen ties with the Philippines.

In a statement issued by the Chinese Embassy Tuesday night, China’s Ambassador to the Philippines Zhao Jianhua underscored his country’s readiness to “work jointly” with Cayetano.

“Ambassador Zhao extended his appreciation for the significant contribution that Hon. Speaker Cayetano has made to promoting China-Philippines relations, as an old and good friend of Chinese people,” the statement read.

“He also underlined that China stands ready to work jointly with Hon. Speaker to further deepen exchanges and cooperation between legislatures, towards more amicable and brighter bilateral relations,” it added.

According to the embassy, Zhao called upon Cayetano on Tuesday to “warmly” congratulate him.

The Chinese envoy conveyed the cordial greetings and congratulatory message from Li Zhanshu, chairman of the Standing Committee of the National People’s Congress (NPC) of China.

Wang has earlier described the former foreign affairs secretary as one of China’s best friends.

The Chinese official also previously said that one of the most important accomplishments of Cayetano as foreign secretary was the return of good bilateral relations between the Philippines and China.

But during his time as foreign affairs chief, Cayetano was criticized for his supposed silence over China’s “creeping invasion” in contested areas of the South China Sea.

The embassy, meanwhile, noted that the lawmaker from Taguig expressed his delight over the congratulatory messages from the Chinese officials.

“He thanked China for the valuable support provided for the Philippine economic and social development,” the statement further read.

The new House speaker is also looking forward “to strengthening exchanges and cooperation with the NPC, bringing Philippines-China relationship of Comprehensive Strategic Cooperation to a new high,” the embassy added.