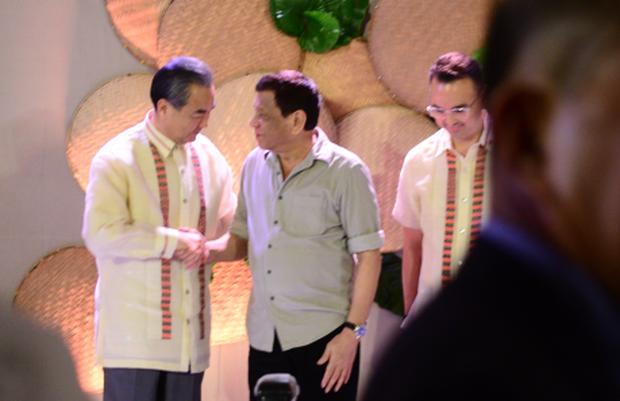 “I’m deeply honored to be invited to this family-like gathering,” the Chinese leader, wearing a barong tagalog, said in the wee hours of Monday.

“I know you invited me to show I’m your friend. That’s why I am wearing barong,” he said, eliciting chuckles from his audience.

“We’re having the best of our relationship with China,” the President said. “Thank you China for all the things you’ve done.

“The fact that you’ve provided livelihood, for allowing the importations of our products, you are telling the world all our products are accepted,” he added. “We’re very happy for the increased trade and cultural cooperation. We have normalized the relationship between China and the Philippines.”

Wang, who described Cayetano as one of China’s best friends, and as his good friend, said one of the most important accomplishments of Cayetano as foreign secretary was the return of good bilateral relations between the Philippines and China.

“The facts prove that the friendly relations between China and the Philippines is in keeping with the long term interest between China and the Filipino people,” he said. “Therefore, it is no coincidence that China opened its consular office today, along with the launching of direct flights between Hongkong and Davao, this is our greatest gift to Cayetano and President Duterte.” /atm