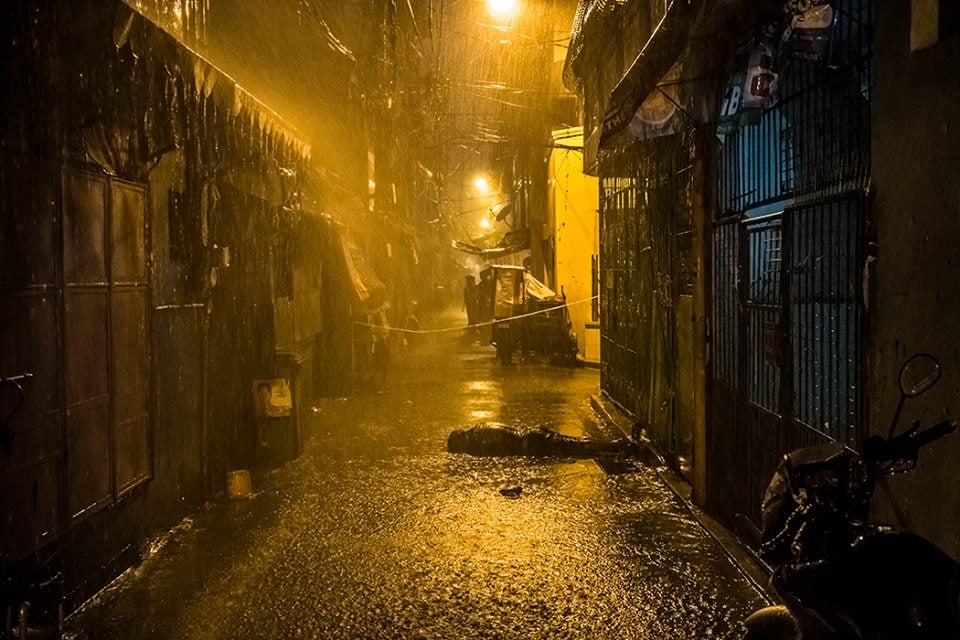 The body of a murder victims lies face down in an alley in the Philippines. This photo, along with others taken during a coverage on the Philippine’s war on drugs, won the Pulitzer Prize for Daniel Berehulak of the New York Times. DANEIL BEREHULAK / NEW YORK TIMES

There appears to be a lack of evaluation by the administration of Philippine President Rodrigo Duterte of the effectiveness, or harm, of his bloody campaign against drugs even if it has led to unprecedented numbers of surrendered or slain suspects, according to a leading American think tank.

Rand Corp., in a 2019 report titled “Contemporary Asian Drug Policy: Insights and Opportunities for Change,” said the case of the Philippines’ campaign against illegal drugs was notable in its harshness but was hazy in its objectives although Duterte had repeatedly said he wanted to slay what he said was the Philippine drug monster and repeatedly affirmed his belief that drug users were beyond redemption.

Duterte once stated that if Hitler had killed 6 million Jews, he’d be happy to kill 3 million drug addicts and pushers in the Philippines. He later apologized to Jews for that comment.

“It is unclear what consideration has been made to measures of success or to the opportunity costs of utilizing scarce public security and health resources,” said the 118-page report’s section on the Philippines.

“There seems to be no official effort to evaluate these policies in terms of their effectiveness or harms caused.,” said the report of Rand, a nonprofit research group based in Santa Monica, California that is being funded by the US government and private donors.

Throughout Asia and the rest of the world, the report said, killing suspects was already found to be a failed approach to reducing or ending the drug trade.

“This is a particularly dubious approach for improving health and safety outcomes and could have unintended consequences,” it said. One of the unintended consequence, the report said, is to drive addicts to further bury themselves in anonymity instead of seeking treatment if their addiction had become a health issue. This could defeat any anti-drug campaign if its purpose was to reduce drug use.

In the Philippines, the report said “dragnets and extrajudicial killings by vigilante groups and law enforcement have gone on since mid-2016.”

It said while some other countries emulated the Philippine example in fighting drugs, like Bangladesh where 200 had been killed recently in anti-drug raids, “there is no empirical basis for their effectiveness in reducing the drug problem.”

Duterte had repeatedly defended his order for police to shoot suspects, saying he was clear about his instructions that lethal force should be applied in cases of suspects violently resisting arrest or putting police lives in danger. In some instances, however, he was categorical about wanting drug suspects killed and at one time said he would feed their bodies to fish in Manila Bay.

Duterte administration officials attest to the effectivity of the Philippine President’s brutal approach in fighting drugs and crimes, however.

In data on crimes nationwide, the Philippine National Police (PNP) said crime volume in 2016, the year that Duterte assumed office, fell by more than 12 percent and fell by a further 6.17 percent by 2017 or 490,393 fewer crimes.

The PNP data appeared to give credence to Duterte’s theory that drugs and criminality are linked and a crackdown on drugs ultimately translates to fewer crimes.

The Rand report said while there was intense focus on “large scale sweeps” of mostly urban poor Philippine communities for drug users and pushers, the Philippine government’s capacity to attack the problem as a health concern was limited, if not nonexistent. This approach could be more effective in cutting down drug use.

Citing as an example the mass surrender of hundreds of thousands of drug suspects in the Philippines immediately following Duterte’s rise to power, the Rand report said these individuals were just made to sign statements admitting drug use.

They were screened for their level of need but “it was unclear how many individuals were appropriately screened given the lack of accredited physicians qualified for drug abuse screening” in the Philippines, the report said, citing Amnesty International data.

It said most rehab programs being offered to those who surrendered were often out of sync with drug-related needs.

“Treatment resources are strained in the country,” said the Rand report.

When Duterte’s war on drugs started in 2016, the Philippines had only 50 rehab centers with a capacity of 5,000 beds, the report said. In late 2016, 10,000 beds were added through a facility donated by a Chinese businessman in Nueva Ecija. The health system was caught “flat footed,” the report said citing former health chief Ubial.

Government facilities, it said, had been criticized for lack of “evidence-based methods” in drug addiction treatment. “Most drug users are referred to unevaluated community-based rehabilitation programs,” the report said.

Thousands of suspects arrested during large-scale sweeps, according to the report, only shined the spotlight on the Philippines’ broken prison system.

“The Philippine prison system exceeded capacity prior to the crackdown,” the report said. But when the war on drugs started, the problem got worse. In the first year alone of Duterte’s war on drugs, the number of prisoners saw a 22 percent increase to nearly 140,000. Government data showed Philippine prisons exceeded capacity by “a factor of five and a half.” Drug offenders accounted for at least 62 percent of total inmates.

Prisons were bursting at the seams but delay in judicial processes appeared to be aggravating the overcapacity. Of 84,000 inmates jailed for drug offenses, only 290 had been sentenced, the report said. The rest languish in detention awaiting trial with some inmates spending up to 10 years in jail before either conviction or acquittal.

Overcrowded jails would not have caught attention had these not been breeding grounds of diseases. “The spread of tuberculosis is of most concern,” said the Rand report. It cited a report by the International Committee of the Red Cross that many inmates suffered from a drug-resistant strain of TB. The risks are high because the highly communicable disease cannot be detained by jail walls.

The Rand report said the numbers are staggering in terms of arrests or surrenders which could further bring Philippine jails to dangerous levels of overcrowding.

From July 2016 to June 2018, government data showed the PNP had arrested nearly 150,000 individuals and more than 1 million people had surrendered. Police conducted 92,000 anti-drug operations between July 2016 and May 2018, leading to more than 4,000 suspects killed. Majority of those killed were poor residents of urban centers.

The Philippine government reported 6,558 patients completing in-patient rehab programs and nearly 160,000 of those who surrendered taking part in community-based outpatient programs, but the Rand report expressed doubt these could be considered measurements of success in the Philippine war on drugs.

“Generally community-based programs in the Philippines are reserved for individuals with mild substance use disorder,” the Rand report said.

“They are locally administered programs that consist of community service, recreation, counselling and spiritual formation,” it said.

“We are not aware of any formal evaluations of the impact of such strategies on drug suppliers in general or in the Philippines specifically,” said the report.

“Although there have been studies of drug law enforcement in other regions, the studies have not focused on extrajudicial killings or large-scale knock-and-plead sweeps,” it added.

“As a policy, the Philippine crackdown has not been evaluated to determine what impact it has had on drug dealing or use,” said the report.

“Nonetheless, early counts of those killed in the street and detained in prison indicate that costs have been substantial,” it said.

On its list of recommendations for Asian governments, including the Philippines’, to more effectively fight the drug trade, Rand Corp. said governments and regional organizations should first improve data-collection “to produce more accurate and more reliable estimates of drug consumption and expenditures.”

“Shareholders should monitor and project the implication of shifting patterns in synthetic drug supply,” it said.