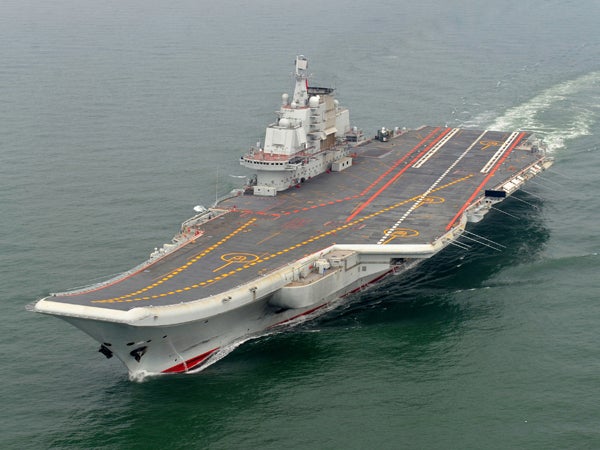 This May 2012 file photo provided by China’s Xinhua News Agency shows the Chinese aircraft carrier Liaoning cruising for a test on the sea. (File photo from AP)

MANILA, Philippines — Defense Secretary Delfin Lorenzana told Chinese Ambassador Zhao Jianhua that its ships should keep their tracking responders on so they could be detected at sea, especially when they pass through Philippine waters.

“I told them that they should not turn off their AIS [automatic identification system] on,” he told reporters Tuesday.

The AIS, which uses high-frequency transmission, allows traversing ships to be tracked by satellites.

Lorenzana’s request comes after reports that Chinese aircraft carrier Liaoning passed through Sibutu Strait last month without the Philippine government knowing about it.

China’s passage in southern Philippine waters before entering the South China Sea was reported by foreign media in June. A supposed track of the carrier’s route was also posted by maritime law expert Jay Batongbacal on social media.

According to Lorenzana, the Chinese are turning off their AIS whenever they pass through Philippine territorial waters because they do not want to be seen.

“These ships, apparently, when they have passed by Sibutu Strait, they turned off their AIS so hindi natin nakuha ng ating radar [so our radar can’t detect them],” he said, adding that it would be difficult for them to hide, especially if they are passing by during daytime.

“If they are passing on broad daylight at pinatay nila [and they turned it off], ayaw nilang malaman kung sino sila [it means they do not want to be seen]. But nakikita naman natin sila [we still see them]. So what’s the use of putting off your AIS?” the defense chief said.

He couldn’t say, however, if China was doing this in “bad faith.”

Lorenzana said that foreign warships should at least notify the Philippine government before passing by the country’s territorial waters.