China appeals for patience on sea disputes with other nations

MANILA, Philippines – China’ ambassador to the  Philippines is urging claimant states in the South China Sea to be patient, saying the maritime issues cannot be settled overnight. 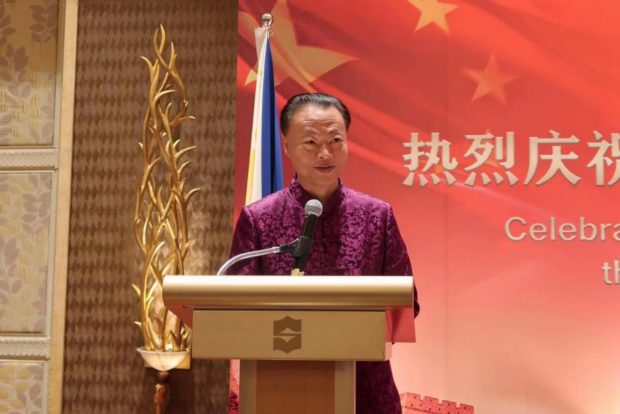 Chinese Ambassador to the Philippines Zhao Jianhua delivers his remarks during the 92nd founding anniversary celebration of the People’s Liberation Army (PLA) on Monday, July 29, 2019. (Photo courtesy of the Chinese Embassy in Manila)

Speaking at the 92nd founding anniversary celebration of the People’s Liberation Army (PLA) in Makati City on Monday, Chinese Ambassador to the Philippines Zhao Jianhua said the maritime disputes in the South China Sea are “sensitive.”

“Despite the differences we have, we are ready to discuss with claimants over the differences we have. We always believe by law is much better than confrontation,” Zhao said in his remarks during the reception, which was attended by Defense Secretary Delfin Lorenzana and Armed Forces Chief of Staff Gen. Benjamin Madrigal Jr.

“And we all know these are very sensitive issues. For China, for the Philippines and for other claimant countries, it’s not easy to settle. It cannot be settled overnight. So we should be patient,” he added.

Zhao also aired China’s “firm” commitment to adhere to the policy of a “peaceful settlement.”

“This policy will remain and will continue,” he said.

“We should have confidence in our wisdom that sooner or later we can settle peacefully,” he further said.

He also said that differences affecting a small percentage of China-Philippine relations should not hold “hostage” the friendship and cooperation between the two nations.

“This is what I call the realistic and pragmatic approach,” he said.

“The situation in the SCS has been stabilized in general,” China’s top diplomat to the Philippines said.

“We stay committed to the peace and stability in the South China Sea,” he added.

The Philippines, China, Taiwan, Vietnam, Malaysia and Brunei all have overlapping claims over the South China Sea.

“China and the Philippines have established a bilateral consultation mechanism on the South China Sea which has played a very important role in managing differences in promoting maritime cooperation and in safeguarding peace and stability in the South China Sea,” Zhao noted.

He then vowed that China would continue to work with the Philippines and other claimant countries “to resolve the relevant disputes in the South China Sea” through “bilateral negotiation and consultation on the basis of respecting historical fact and in accordance with international law” including the United Nations Convention on the Law of the Sea (UNCLOS).

In 2016, the United Nations Permanent Court of Arbitration (PCA) ruled in favor of the Philippines and invalidated China’s so-called “nine-dash line,” which claims nearly the entire South China Sea.

China, however, refused to recognize the ruling.

The ruling stated that China violated its obligations under UNCLOS to protect and preserve the maritime environment when it built artificial islands in Mischief Reef without getting the necessary permission from the Philippines. /gsg