BRI projects not set up to ‘frame’ PH, other involved countries – Chinese official 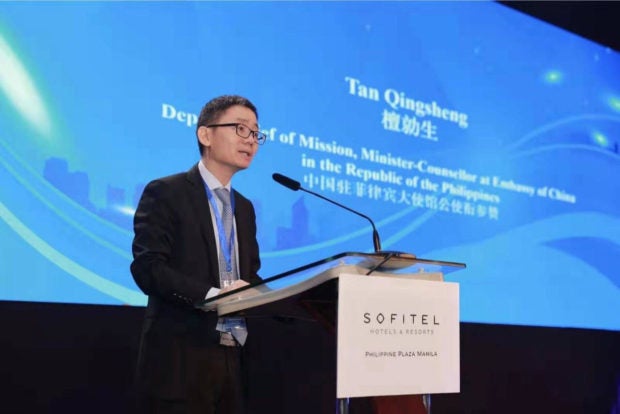 Tan Qingsheng, Deputy Chief of Mission and Minister-Counsellor at the Embassy of China in Manila, maintains that the so-called “China debt trap” is “completely groundless.”Photo courtesy of the Chinese Embassy in the Philippines.

MANILA, Philippines — Cooperation projects under the Belt and Road Initiative (BRI) are not plotted to “frame” any country or are “imposed on anyone,” a Chinese official clarified on Friday.

In a speech at the Belt and Road China-Philippines Forum on People-to-People Exchange & Economic Cooperation in Pasay City, the Deputy Chief of Mission and Minister-Counsellor at the Embassy of China in Manila, Tan Qingsheng, reiterated that the so-called “China debt trap” is “completely groundless.”

“All the cooperation projects are not ‘imposed on anyone’ or designed to ‘frame’ any other country,” Tan said.

“The BRI is a ‘pie’ for everyone to share, not a ‘pitfall’ that hinders development,” he added.

This following concerns over loan agreements the Philippine government has signed with China.

Neri Colmenares, Bayan Muna chairman, earlier said that the Kaliwa Dam deal, which is funded by China, had “onerous conditions” that would be “detrimental to the Filipino people.”

But the Philippine government has since defended the terms under the loan deals it signed with China.

“What is the BRI really about? There are a lot of interpretations, even theories of conspiracies about BRI,” Tan said.

The BRI was first launched in 2013 after it was proposed by Chinese President Xi Jinping.

According to Tan, the said cooperation program “has become one of the most important regional cooperation platforms, featuring policy coordination, infrastructure connectivity, trade facilitation, finance integration, and people to people exchanges.”

The Chinese official added that over 160 countries have signed agreements with the East Asian economic powerhouse on the BRI cooperation.

Tan further noted that the total trade volume between China and countries participating in the BRI, including the Philippines, has reached more than $6 trillion while China’s investment has grown to over $80 billion with around 300,000 jobs created in the nations involved.

“The BRI is a peaceful development platform, not a geopolitical tool. The BRI promotes open and inclusive economic cooperation. It is not aimed at excluding anyone or replacing any other mechanisms, still less forming an exclusive geopolitical alliance,” he said.

“China has no intention to seek any sphere of influence or gain any geopolitical advantages through the BRI. We welcome any country who is willing to contribute to the regional connectivity and integration to join the BRI,” he added.

The Chinese official also said that he recognizes the Philippines as “an important developing country with great potential.”

“Under the strategic guidance of our two leaders, China-Philippines relations have entered a golden era with the three major pillars of our bilateral relations, namely, political and security coordination, economic cooperation, and people-to-people exchanges been greatly strengthened,” Tan said.

Tan added that the development of bilateral relations between the Philippines and China has provided “tangible benefits to our peoples.”

He noted that the bilateral trade of the two countries volume reached $55.7 billion with an 8.5 percent year-on-year increase in 2018.

“China is now the Philippines’ top trading partner, the largest source of imports and the fourth largest export market. Over the past two years, we have imported more than $2 billion tropical fruits from the Philippines,” he said./ac