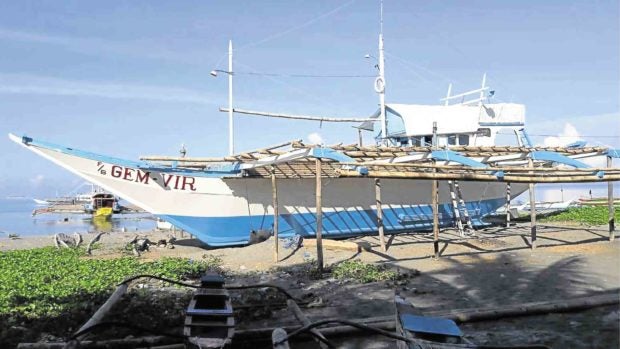 THEY LOST EVERYTHING The fishing boat Gem-Vir 1, shown at home in San Jose, Occidental Mindoro, in this file photo, was anchored at Recto Bank in the South China Sea when it was hit by a Chinese vessel on Sunday night. It sank but the crew survived, although, according to the boat owner, they lost their catch and everything else on the boat. —CONTRIBUTED PHOTO

MANILA, Philippines – Malacañang believes that Beijing should sanction the fishermen of the Chinese vessel that rammed a Filipino vessel at the Recto Bank on June 9.

“[W]e share the public opinion that China should sanction the crew members of the involved vessel which carried its flag,” Presidential spokesperson Salvador Panelo said in a statement.

“This position has never wavered, contrary to the false narratives made by the President’s most vocal critics and detractors who have been busy stoking anti-China views with the sole aim of discrediting the diplomatic strategy of the President — to no avail,” Panelo added.

He issued the statement after a Pulse Asia survey showed 36% of Filipinos wanted the Philippine government to sanction Chinese fishermen involved in the sinking of a Filipino boat in the West Philippine Sea.

Bringing the issue before the United Nations General Assembly was the least favored option.

Meanwhile, the same pollster said most Filipinos believed the Philippines could not trust Russia and China too much or not trust these countries at all.

“As we previously said regarding similar survey results conducted in the past, we are not surprised — neither are we bothered — by the outcome, considering that it has only been three years since the Duterte Administration has chartered an independent foreign policy course for the Philippines,” Panelo said.

“While we are not forcing any preference to the mentality of our people, we understand that it entails a lot of information dissemination for Filipinos, who have been pro-American for more than a hundred years, to appreciate the current government’s foreign diplomacy approach, that is ‘friends to all, and enemies to none’ which has reaped economic benefits to the country,” he added.

Since he assumed office in 2016, President Rodrigo Duterte has fostered warmer ties with Manila’s non-traditional allies like China and Russia.

The President has slammed the Philippines’ traditional ally, the United States, for interfering in the country’s domestic affairs, particularly his bloody war on drugs./ac