MANILA, Philippines — Thirty-six percent of Filipinos would like the Philippine government to compel China to sanction members of the Chinese vessel that allegedly rammed a Filipino fishing boat in June while bringing the issue before the United Nations General Assembly was the least favored option, a Pulse Asia survey bared Friday.

The survey, conducted from June 24 to 30, 2019, revealed that punishing members of the Chinese vessel was the most preferred option in Metro Manila at 46 percent, the rest of Luzon (45 percent), and classes D and E (34 percent to 36 percent). 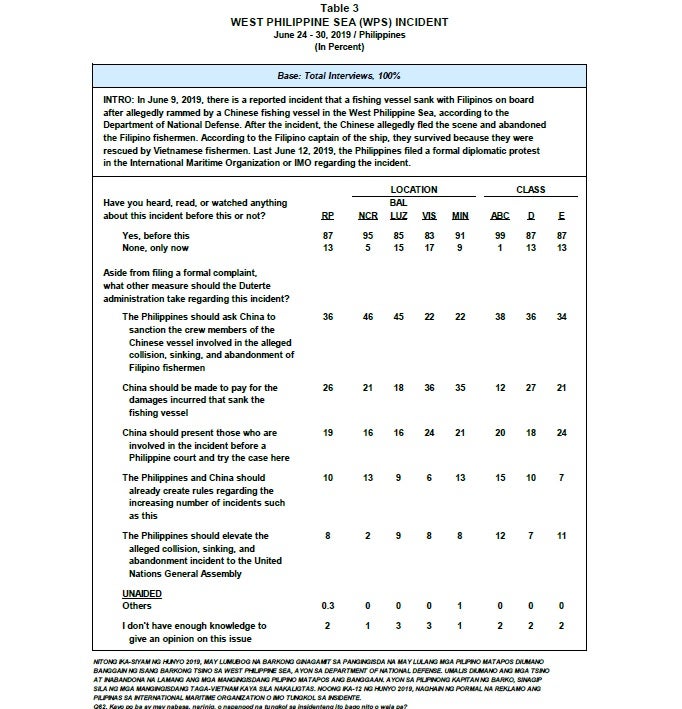 Meanwhile, 26 percent of the respondents believe China itself should be made to pay for the damages incurred by F/B Gem-Ver and injuries suffered by its 22 crew members. This, the major pollster said, was the most favored option in the Visayas (36 percent) and Mindanao (35 percent).

On June 9, Defense Secretary Delfin Lorenzana reported that Chinese men aboard a bigger vessel allegedly rammed a Philippine fishing boat, leaving Filipino crew members struggling to stay afloat in the waters of the Recto Bank (Reed Bank) in the West Philippine Sea (WPS) for hours before they were rescued by a Vietnamese boat.

Eighty-seven percent of Filipinos were also recorded as being aware of the Recto Bank incident, according to the poll.

For 19 percent of Filipinos, the crew members of the Chinese fishing vessel should be presented before a Philippine court where they should be tried while 10 percent wants the Philippines and China to sit down and agree on a set of rules that would apply to similar maritime incidents in the WPS.

Of the five prelisted options included in the survey, the least favored is for the Philippines to bring the issue before the United Nations General Assembly (8 percent).

Pulse said the nationwide survey was conducted through face-to-face interviews among 1,200 adults 18 years old and above. It has a ± 2.8% error margin at the 95 percent confidence level. /muf