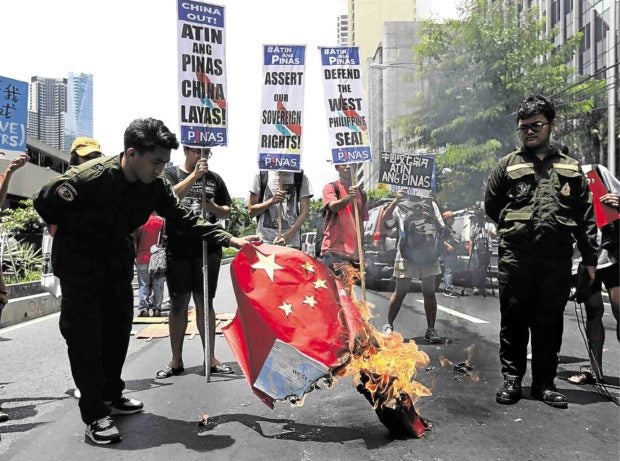 FIRED UP. Independence Day celebrations are marked by flag-raising ceremonies on Wednesday. But outside the Chinese consulate in Makati City, a replica of the Chinese flag goes up in flames as youth groups protest Beijing’s military buildup in the South China Sea and its intrusions into Philippine waters. —RICHARD A. REYES

Lorenzana condemned the hit-and-run and called for an investigation and diplomatic action.

“We denounce the actions of the Chinese fishing vessel for immediately leaving the incident scene abandoning the 22 Filipino crewmen to the mercy of the elements,” he said in a statement.

“We condemn in the strongest terms the cowardly action of the Chinese fishing vessel and its crew for abandoning the Filipino crew. This is not the expected action from a responsible and friendly people,” he said.

The incident happened on Sunday night.

Lorenzana said the Philippine fishing boat Gimver 1 was anchored at Recto Bank when it was hit by the Chinese fishing vessel.

The Philippine fishing boat sank after being hit, he said.

Instead of stopping to help the crew of the Philippine boat, he said, the Chinese fishing vessel sailed away.

“Fortunately, a Vietnamese fishing vessel was in the vicinity, rescued all 22 fishermen, and brought them to safety,” Lorenzana said.

“We thank the captain and crew of the Vietnamese vessel for saving the lives of the 22 Filipino crew,” he said.

Lorenzana urged an investigation and recommended diplomatic action to prevent a repeat of the incident.

“I take my cue from Defense Secretary Lorenzana. What is contemptible and condemnable is the abandonment of the

crew to the elements,” Locsin tweeted.

“Vietnam’s rescue will be the basis of enhanced Vietnam-Philippine military cooperation,” he said.

Locsin said he was expecting a report on the incident.

Sen. Panfilo Lacson said the “cowardly act” of the Chinese fishermen who abandoned the Filipino crew of the sinking fishing boat should prompt high-level talks between the Philippines and China.

“Nothing short of a hard and serious punitive action by the Chinese leadership against the Chinese crew responsible for the cowardly act against our fishermen could assuage the majority of our countrymen’s strong apprehension about the sincerity of China toward us,” he said.

“This incident calls for a leader-to-leader talk. As I said, nothing short of a serious punitive action by the Chinese government against those responsible can convince us of a real friendly relationship between our peoples,” he said.

Lacson also raised doubt over China’s treatment of the Philippines, saying: “We don’t treat our friends like that and we don’t expect to be treated that way, either.”

Opposition Sen. Francis Pangilinan added his voice to the condemnation of the Chinese action and urged the Duterte administration “to reverse its policy of subservience and appeasement and file a diplomatic protest.”

“We condemn the illegal acts committed by the Chinese vessel. We denounce the inhumane and cruel act of abandoning 22 human lives in the high seas,” Pangilinan said.

“No self-respecting nation in the world will stay meek and docile in the face of such cruelty and aggression,” he added.

Despite a 2016 ruling by the UN-backed Permanent Court of Arbitration invalidating its claim over nearly the entire South China Sea, China insists it owns Recto Bank, as well as seven Philippine-claimed reefs in the heavily disputed waterway.

China has deployed coast guard vessels and a maritime militia — civilian boats disguised as fishing vessels — to intimidate rivals for territory in the Spratly archipelago, in the middle of the South China Sea.

It was not clear on Wednesday whether the Chinese fishing vessel was part of China’s maritime militia.