China will take all the fish if granted WPS access — Carpio 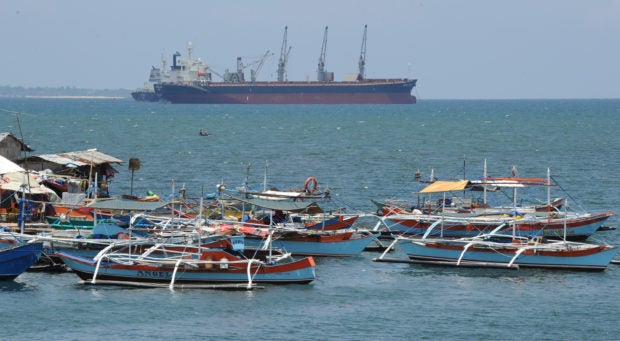 Fishing boats are anchored near a foreign cargo vessel facing the West Philippine Sea at the port of Santa Cruz in  Zambales.  (AFP File Photo)

MANILA, Philippines — If Chinese fishermen would be allowed access to marine resources in the West Philippine Sea, they would siphon off “all the fish,” Supreme Court Senior Associate Justice Antonio Carpio said on Tuesday.

“If the Chinese are allowed to fish in the West Philippine Sea, they will take all the fish because they have a huge fishing fleet, the largest in the world,” Carpio said in an interview with ABS-CBN News.

Caprio said that China has about 220,000 huge motorized fishing vessels.

“They can scoop the fish there in less than a year. And the fish will be gone, it would be depleted. And we cannot compete with China because we have small bancas, wooden boats,” he said.

But while President Rodrigo Duterte said in his fourth state of the Nation Address on Monday that he would enforce the ruling of the Permanent Court of Arbitration, he said there was no way to stop the Chinese from fishing in the country’s exclusive economic zone (EEZ) and he would not risk losing Filipino forces in a clash in the disputed waters.

“When Xi says ‘I will fish,’ who can prevent him?” Duterte said as he defended his nonconfrontational approach to China over the territorial disputes in his annual address before a joint session of Congress. He was referring to Chinese President Xi Jinping.

“If I send my Marines to drive away the Chinese fishermen, I guarantee you not one of them will come home alive,” Duterte said, adding that diplomatic talks with Beijing have allowed the return of Filipinos to disputed fishing grounds where Chinese forces previously shooed them away.

“Because in the coastal areas of China, there’s no more fish there, hardly. So that’s why the Chinese fishing fleet is now fishing in our EEZ, and they’re going all the way to Africa, to South America to fish because there’s not enough fish in their area of the South China Sea,” he said.

Duterte earlier bared that he had an agreement with Chinese President Xi Jinping to allow China to fish in the Philippine’s EEZ after Beijing granted Filipino fishermen access to Scarborough Shoal locally known as Bajo de Masinloc.

Critics have repeatedly criticized Duterte, who has nurtured friendly ties with Beijing, for not standing up to China’s aggressive behavior in the disputed waters and deciding not to immediately seek Chinese compliance with an international arbitration ruling that invalidated Beijing historic claims to virtually the entire sea. China has refused to recognize the 2016 ruling.

The decision also found that China had breached its duty to respect the traditional fishing rights of Filipinos when Chinese forces blocked them from the Scarborough Shoal off the northwestern Philippines in 2012. The Philippines, however, could also not deny Chinese fishermen access to Scarborough, according to the ruling. But the decision did not specify any traditional fishing areas within the Philippines’ exclusive zone where the Chinese could be allowed to fish.

An exclusive economic zone is a 200-nautical-mile (370-kilometer) stretch of water where a coastal state has exclusive rights to fish and exploit other resources as well as undersea gas and oil based on the 1982 U.N. Convention on the Law of the Sea. With a report from Associated Press/gsg/dam 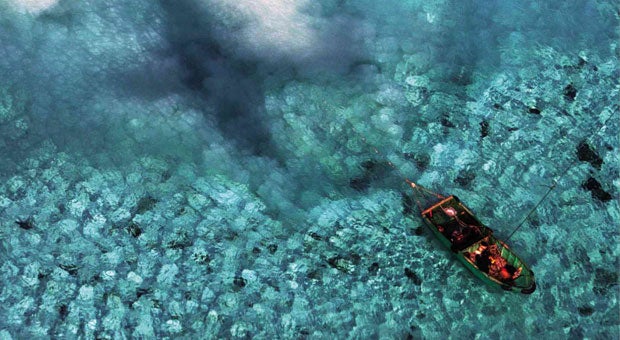 Giant clams and corals, harvested from Bajo de Masinloc (Scarborough Shoal) off the coast of Zambales province, are stacked on the deck and hold of a Chinese ship, as a small Chinese boat scrapes the coral reef bed. China and the Philippines both claim the shoal, which lies within the Philippine exclusive economic zone. (NIÑO JESUS ORBETA)