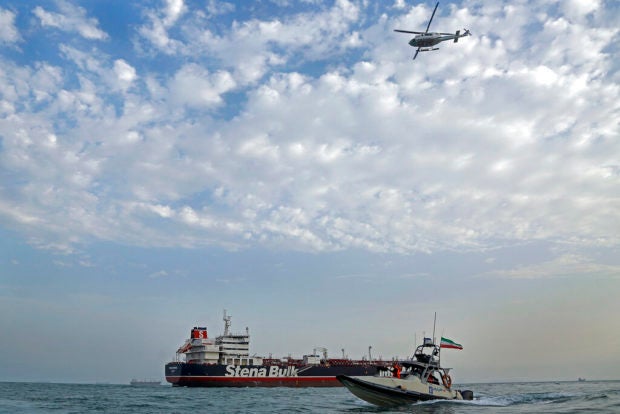 A speedboat and a helicopter of the Iran’s Revolutionary Guard move around a British-flagged oil tanker Stena Impero which was seized on Friday by the Guard, in the Iranian port of Bandar Abbas, Sunday, July 21, 2019. Iranian officials say the seizure of the British oil tanker was a justified response to Britain’s role in impounding an Iranian supertanker two weeks earlier off the coast of Gibraltar, a British territory located on the southern tip of Spain. (Mizan News Agency via AP)

Iran’s state broadcaster has released new video showing for the first time the 23-member crew of the British-flagged ship seized by Iran — an apparent attempt to convey they are safe and unharmed.

In the video aired Monday, the Stena Impero crew is seen dressed in red uniforms and seated around a table onboard the vessel as an unidentified Iranian man is heard thanking them for their cooperation. A cameraman is heard telling them not to look at the camera.

It wasn’t clear if the crew was under duress to take part in the filming.

Other choreographed shots show a man checking on the ship, the crew sharing a laugh and talking next to a coffee machine inside the ship. The crew’s chefs are seen preparing food. Another video, also released by Iran’s state broadcaster, shows Iran’s flag hoisted on the ship’s bridge.

The ship was seized Friday in the Strait of Hormuz.

Stena Bulk, the owner of the seized British tanker, said the vessel’s crew members are of Indian, Filipino, Russian and Latvian nationalities. Iranian officials say the crew remain on the tanker.