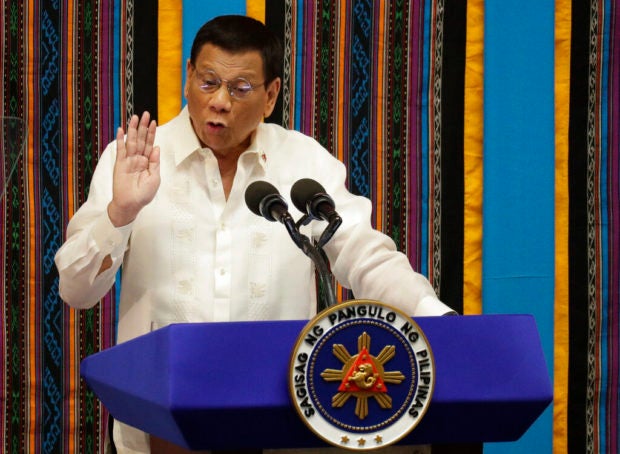 Philippine President Rodrigo Duterte gestures during his 4th State of the Nation Address at the 18th Congress at the House of Representatives in Quezon city, metropolitan Manila, Philippines Monday, July 22, 2019. (AP Photo/Aaron Favila)

MANILA, Philippines — President Rodrigo Duterte, in his fourth State of the Nation address (Sona), said he had pleaded with Chinese President Xi Jinping that the Philippines be allowed to fish in waters that form part of its exclusive economic zone.

“The West Philippine Sea is ours. There is no ifs and buts. It is ours,” the President said in address on Monday.

“But [if] we have been acting along that legal truth and line, … we have to temper it with the times and the realities that we face today,” he added. “More and better results can be reached in the privacy of a conference room than in a squabble in … public.”

“Of course, when Xi says I will fish, who can prevent him? I then told him, we will fish because we claim it. I told him, please allow us because before, they were driving away our fishermen,” the President said.

A leading critic on the maritime dispute, Senior Associate Justice Antonio Carpio, had urged the President to avoid discussing his talks with Xi on the matter in his address.

But the President disclosed his talks with Xi and maintained that both the United Nations Convention on the Law of the Sea (Unclos) and the 2016 arbitral ruling for the Philippines, as based on Unclos, recognized that another state could utilize the resources within a coastal state’s exclusive economic zone.

“The arbitral [ruling] even states the Philippines may enter into fishing agreements with other states provided certain conditions and requisites in the Unclos are met,” he said.

“If I send my marines to drive away the Chinese fishermen, I guarantee you not one of them will come home alive,” he reiterated anew in his speech.

“We are dismayed by [Duterte’s] usual dichotomizing of our legitimate call for fishing rights and having a war with China, when we have the legal venue [in] which we are at an advantage, such as the UN-backed Permanent Court of Arbitration decision,” said the group’s national chair, Fernando Hicap.

“What we demand is justice and for the rights of Filipino fishers to be respected in our own marine territory,” Hicap said. “We can have that sans armed confrontation, only political will from the government and devotion to advance the interest and welfare of the county and the people.”

“When is he going to stop it? When China has already fully exhausted our marine resources and completed its military installation in the West Philippine Sea?” he said. “Now, more than ever, is the high time to resolve this dispute in the name of preserving our remaining resources.”