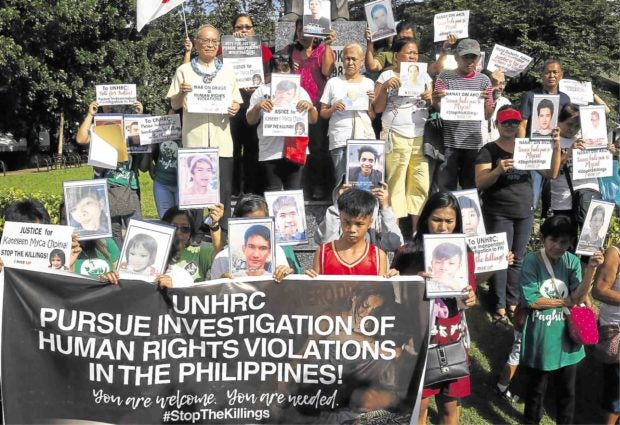 FACE OF EJKS Pictures of victims of alleged extrajudicial killings (EJKs) in President Duterte’s war on drugs are displayed in this July 9 photo of a gathering of their relatives, two days before the UN Human Rights Council approved a resolution expressing concern over widespread human rights violations in the Philippines and calling on the administration to allow UN rights representatives to visit the country. —AP

MANILA—President Duterte took a swipe at Iceland on Friday for spearheading a UN resolution to investigate his bloody war on drugs, saying it was a nation made entirely of ice, with no understanding of his country’s problems.

“What is the problem of Iceland?—Ice only. That is your problem. You have too much ice and there is no clear day and night there,” he said in a rambling speech to corrections department officials.

“So you can understand why there is no crime, no policeman either, and they just go about eating ice,” he said. “They don’t understand the social, economic, political problems of the Philippines.”

The resolution on the Philippines, led by Iceland, was adopted by the UN Human Rights Council in Geneva on Thursday by a vote of 18 countries in favor and 14 against, with 15 abstentions.

The exact number of dead in President Duterte’s war on drugs is impossible to independently verify. Police say they have killed 6,600 who were armed and fought back during attempts to arrest them, but activists say there may have been as many as 27,000 drug-related killings overall.

Human rights groups say there is a pattern of executions, planted evidence and falsified reports, and a state unwilling to investigate widespread allegations of systematic abuses by police during the three-year-old crackdown. The government rejects that as lies.

Duterte’s spokesperson, Salvador Panelo, said on Friday that Iceland had introduced a resolution “based on false information, bogus news,” and relied on narratives of the President’s opponents and biased media.

He told news channel ANC that Duterte would permit UN investigators to conduct a probe in his country “if he finds the purpose legitimate.”

The President defended his crackdown and said something had to be done because millions of Filipinos were “slaves to a drug called ‘shabu’ (crystal meth).”

Referring to frequent criticism that he publicly gave police orders to kill, he said there was nothing wrong with protecting his country.

The President spoke at the 28th anniversary of the Bureau of Jail Management and Penology (BJMP) held at Camp Aguinaldo, where he thanked the BJMP for its role in upholding the rule of law.

Duterte again warned that “drugs are flooding the country.”

“So what’s wrong? I am asking the human rights people. Is it wrong to say, ‘if you’ll destroy my country, I will kill you’? Is that a crime for the President-mayor? Or a governor to say that in public?” he asked.

He also said other nations believed “hook, line and sinker” that detained Sen. Leila de Lima, one of the fiercest critics of his war on illegal drugs, was a political prisoner. —REPORT FROM JULIE M. AURELIO