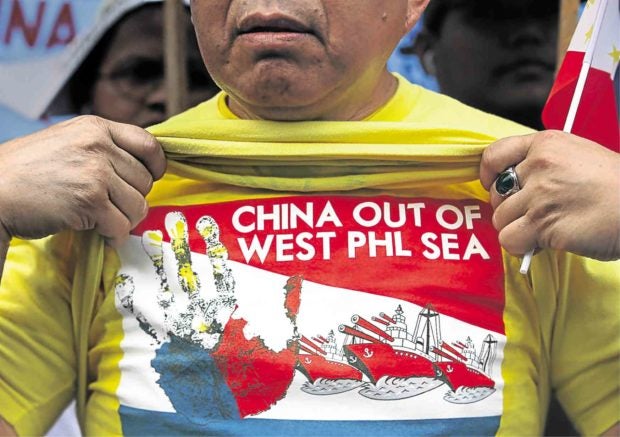 CHEST OUT FOR SOVEREIGNTY A protester stands outside the Chinese consulate in Makati City during a rally on Friday marking the third anniversary of The Hague arbitral tribunal ruling that rejected Beijing’s expansive claims in the South China Sea, in a landmark case brought by Manila in 2013. —LYN RILLON

A staunch critic of President Duterte warned him not to mention in his State of the Nation Address (Sona) on July 22 the so-called verbal agreement he made with China’s President Xi Jinping allowing Chinese access to the country’s exclusive economic zone (EEZ) in the South China Sea.

Senior Associate Justice Antonio Carpio said including the agreement in the President’s speech would give it “confirmation” and make it “legally binding” since the Sona “is addressed to the nation.”

Carpio added that while Foreign Secretary Teodoro Locsin Jr. already clarified that the agreement is not foreign policy. “If the President will confirm it in the Sona, we cannot get out of it anymore. We are bound by that,” he said.

The only way to undo this consequence is “if China allows us to undo it [but] you can only undo it with the consent of the other party,” Carpio said.

Early this month, President Duterte claimed he struck a deal in 2016 with Xi allowing Chinese access to the Philippines’ 370-kilometer EEZ in the South China Sea.

Carpio further warned: “You know China has the largest fishing fleet in the world. Their fishing fleet looms over the oceans and seas all over the world. It will take them a short time to deplete Reed [Recto] Bank or even the West Philippine Sea. You can see what’s [already] happening. Fish stock [in the area] has been going down,” he said.

Carpio was one of the speakers at a talk yesterday called “Three Years After Our Nation’s Arbitral Victory: An Environmental Crisis”—a forum hosted by Stratbase-Albert del Rosario Institute.

The forum served to commemorate the third anniversary of the arbitral ruling under the United Nations Convention on the Law of the Sea declaring that China’s claim to historic and other sovereign rights related to the nine-dash line violates international law. 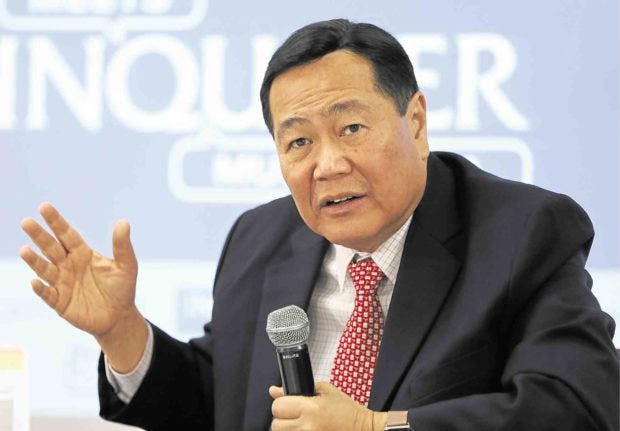 “If the President appears during the Sona and says, ‘Yes, I confirm (the agreement), then we’re dead. I mean, we’re bound by that … I think we should all tell everybody to tell the President, ‘Please don’t say it’,” he added.

He also wants to know whether the verbal agreement “is now Philippine policy” with a warning that it is “a clear violation of our Constitution that mandates our President and our military to defend what is ours.”

Morales said the communication that she and Del Rosario filed in the International Criminal Court accusing China of “crimes against humanity” for its destruction of the Philippines’ seabed was one such move.

Diokno presented the laws for the protection of the country’s marine resources.

These include a provision in the 1987 Constitution requiring the state to reserve the use and enjoyment of marine resources “exclusively to Filipino citizens”; another requiring it to protect our waters against foreign intrusion and a third indicating that the Philippines “shall pursue an independent foreign policy.”

Diokno also cited Presidential Decree No. 1599 issued in 1978 recognizing the country’s “sovereign rights over the EEZ” and its “exclusive … jurisdiction with respect to the establishment and utilization of artificial islands, … installations and structures.”

He cited Republic Act No. 9522 signed in 2009 which defines the country’s archipelagic baseline including the EEZ, and Administrative Order No. 29 issued by then President Benigno Aquino III which names maritime areas on the western side of the archipelago to include the EEZ specifically.

Read Next
PH seafarers need lifeline or sink amid global rivals
EDITORS' PICK
In Borongan, nuns play hoops (not mahjong)
Why Tagle is a leading papal contender
PH resumes talks with China on Chinese-funded transport projects
Powered by style, innovation and passion
House energy committee chair Arroyo bats for cheap electricity
A laptop that maximizes your WiFi so you can maximize your productivity
MOST READ
Imee Marcos bares illegal importation of white onions
Why Tagle is a leading papal contender
SRA officials should resign after ‘illegal sugar order’ – Zubiri
My neighbor FVR: From soldier to president
Don't miss out on the latest news and information.