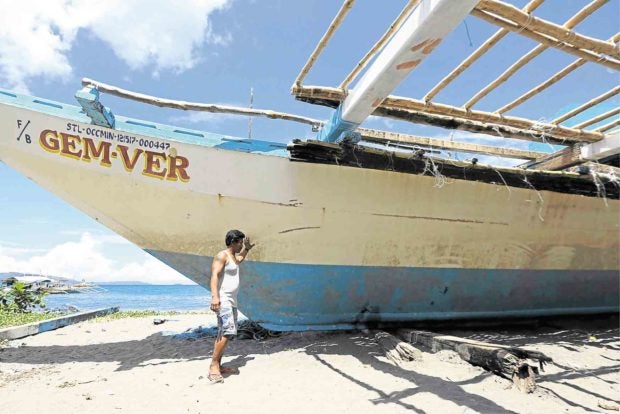 The Gem-Ver 1 beached at Barangay San Roque in San Jose, Occidental Mindoro, before a Chinese trawler struck and sank it in the West Philippine Sea on the night of June 9, 2019. (File photo by RICHARD A. REYES / Philippine Daily Inquirer)

President Rodrigo Duterte described the sinking of the Filipino fishing boat Gem-Ver 1, which happened in the West Philippine Sea last June 9, as a “little maritime incident.”

The PCG-Marina report, dated June 20, said the Chinese vessel failed to create measures to prevent itself from hitting and eventually sinking of the Philippine boat.

The report also mentioned the failure of the Chinese vessel to assist the 22 Filipino fishermen whom they abandoned at the sea.

“Our countrymen were left to die in the sea, and yet Malacañang is protecting China,” Cullamat said in Filipino. “This is plain treason. We are not a province of China and we won’t allow that to happen.”

In an interview aired over AM radio station DWIZ, Sen. Sherwin Gatchalian said in Filipino: “We can file a case in court because it happened inside our EEZ so that can get justice for our fishermen. What we don’t want is a repetition of this accident. We can avoid that if we file a case.”

The senator also asked the Chinese government to be independent in probing the incident and help in finding justice for the Filipino fishermen.

“Their investigation should be fair and impartial,” he said.