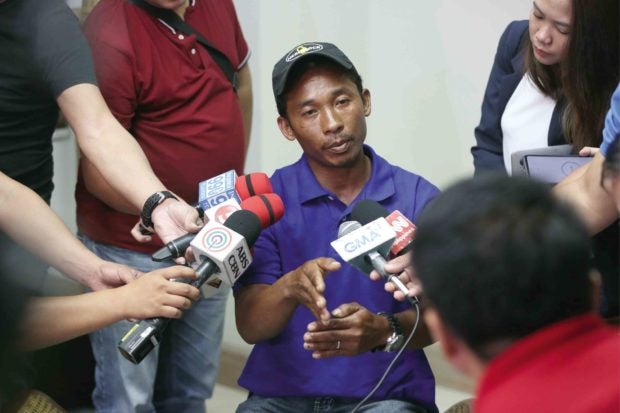 STORYTELLER. Despite their nightmarish experience, cook Richard Blaza of the Gem-Vir 1 tells reporters how their fishing boat was hit by a Chinese vessel at Recto Bank (international name: Reed Bank). —NIÑO JESUS ORBETA

SANGLEY POINT, Cavite, Philippines — President Rodrigo Duterte on Monday dismissed the sinking of a Philippine fishing boat in the South China Sea after being hit by a Chinese trawler as a “little maritime accident” and said he would not go to war with China over the incident.

Breaking his silence a week after the incident, the President said the collision was the result of “miscommunication.”

“What happened in the collision is a maritime incident. Do not believe the dumb politicians who want to send the Philippine Navy. You do not send gray ships there. That is only a collision of ships,” the President said in a speech during the Philippine Navy’s 121st anniversary celebration in Sangley Point.

Wait for results of probe

“Maritime incident is a maritime incident. It is best investigated. And I do not now issue statement because there is no investigation and there is no result. Then the only thing we can do is wait and give the other party the right to be heard. That is important,” the President said.

The Philippine fishing boat Gem-Vir 1 was anchored near Recto Bank — internationally known as Reed Bank — when it was hit by the Chinese trawler around midnight on June 9. 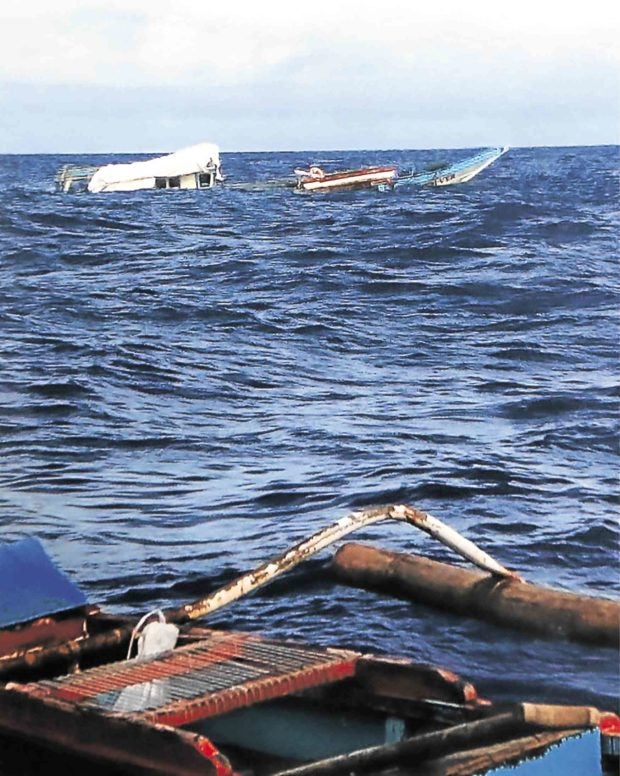 The fishing boat sank, but the Chinese vessel, instead of stopping to help the Filipino fishermen who had been thrown into the water, sailed away.

A Vietnamese fishing boat that arrived at the scene hours later rescued the Filipino fishermen.

The Philippines has filed a diplomatic protest against China over the incident and called the attention of the United Nations International Maritime Organization to the Chinese violation of the laws of the sea.

But the President, in his speech on Monday, dismissed the matter as a small incident between two boats.

“That’s just two boats. Now you go there and create a tension. I said I am not a fool of a President to allow that. If we have to die, we must have to die in the correct way and to die with dignity. Not just by bumping into somebody,” the President said.

Energy Secretary Alfonso Cusi on Sunday said the Chinese trawler could not have intentionally hit the Gem-Vir 1, prompting Sen. Risa Hontiveros to urge Malacañang on Monday to stop government officials from “making wild, outlandish remarks” about the sinking of the boat and the Chinese trawler abandoning 22 Filipino fishermen after the collision.

Hontiveros lambasted Cusi for his remarks during a visit to San Jose, Occidental Mindoro, for a talk with the fishermen, who returned home on Friday with help from the Philippine Navy.

“Cusi’s statements effectively side with China when he tries to downplay the severity of the matter. Is there some kind of ‘fifth column’ within the Cabinet that favors China’s attempts to [tamp down] the issue,” Hontiveros said in a statement.

“I suggest that the Duterte [administration] rein in its own people and stop them from making wild, outlandish remarks,” she added.

Hontiveros said Cusi’s comments were “the height of insensitivity” toward poor fishermen, “ignorance of the facts and even [bordered] on the treacherous.”

The opposition senator questioned Cusi’s basis for claiming the hit on the Gem-Vir 1 was unintentional.

“Is the secretary of energy now an expert [in] evaluating collisions between sea vessels? Is he now lawyering for the Chinese government?” Hontiveros asked.

“He told them it was unintentional or there would have been deaths. He said the damage to the boat was caused by waves. Wasn’t that an insult?” Insigne said.

Hontiveros said Cusi should apologize to the Gem-Vir 1’s crew and to the nation lest he be seen as sympathetic to the Chinese side.

Senate Minority Leader Franklin Drilon on Sunday said China should at least apologize for the incident, but Malacañang said on Monday that it was premature to make such a demand.

Presidential spokesperson Salvador Panelo said investigations by both countries were going on and that the Philippine government first wanted to establish the facts before making a decision.

He said it was also too early to say whether the incident could activate the Philippines’ mutual defense treaty with the United States.

Panelo slammed the circulation of a meme attributing to him a statement to the effect that the crew of the Gem-Vir 1 were just “maligning the Chinese,” they “could be hallucinating” and that they “could be charged as well.”

“This meme puts me, as well as the Office of the President, in a bad light, as we are placed in a position which suggests that we are siding with the Chinese,” Panelo said.

He said there was no official record that would show he issued the controversial statement.

Nograles said the discussion had two objectives: the protection of Filipino fishermen and the Philippines’ exercise of its rights in its exclusive economic zone in the South China Sea.

Agriculture Secretary Emmanuel Piñol was designated chair of a group that would provide assistance to the crew of the Gem-Vir 1, Nograles said.

Cusi is Piñol’s cochair, he said.

The Gem-Vir’s owner, Arlyn de la Torre, and one of the fishermen, Richard Blaza, were invited to the Department of Agriculture on Monday to give an account of the collision.

Piñol quoted Blaza as saying the fishermen wanted to go back to Recto Bank despite the incident and that what happened was an “isolated incident.”

Piñol said De la Torre and Blaza would submit a sworn statement to the Cabinet on Monday night and they would help the government investigate the collision.

There were reports on Sunday that the President had called a Cabinet meeting for Monday for a discussion of the sinking of the Gem-Vir 1.

The reports also said the President had invited the Gem-Vir 1’s captain, Junel Insigne, to a meeting in Malacañang.

Panelo and Executive Secretary Salvador Medialdea said the President did not call a Cabinet meeting and did not ask for a meeting with Insigne.

Junard Insigne said his brother started to travel to Manila with Bureau of Fisheries and Aquatic Resources officials on Sunday for a meeting with the President, but gave up when their vehicle reached Oriental Mindoro.

Junard Insigne said his brother abandoned the trip and returned to San Jose because he was unwell. —With reports from Marlon Ramos, Karl R. Ocampo and Madona T. Virola