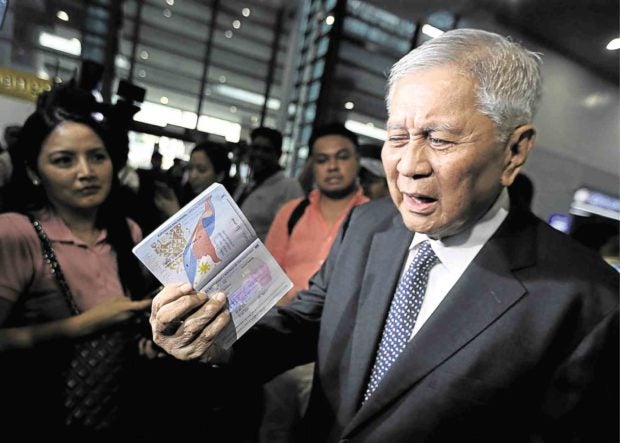 LEGITIMATE, REVALIDATED Former Foreign Secretary Albert del Rosario shows his diplomatic passport to reporters on his return on Friday from Hong Kong, where he was detained for six hours and eventually denied entry. —RICHARD A. REYES

“Naggamit-gamit ng passport na hindi naman dapat. When you are no longer an employee of government, you have no business using a government diplomatic passport,” Duterte said in his speech at the 122nd Presidential Security Group founding anniversary at the Malacañang Park.

Del Rosario was held and questioned for six hours at the Hong Kong International Airport on June 21 before he was finally denied entry.

Del Rosario went through the same ordeal former Ombudsman chief Conchita Carpio-Morales endured when she was barred from entering Hong Kong in May.

Del Rosario and Morales filed a communication for crimes against humanity before the International Criminal Court against Chinese President Xi Jinping in March.

The Department of Foreign Affairs ordered the cancellation of diplomatic passports given to former diplomats of the country, including Del Rosario’s.

But the ex-top diplomat said the department order revoking all diplomatic passports issued to former DFA chiefs and ambassadors “cannot supersede the [Philippine] Passport Act” as it “has to go through Congress for approval.”

Del Rosario argued that under the Philippine Passport Act, former AEPs — Ambassador Extraordinary and Plenipotentiary — “had been granted the privileges of a diplomatic passport and that “this is a part of the [Philippine] Passport Act and it constitutes the law of the land.”