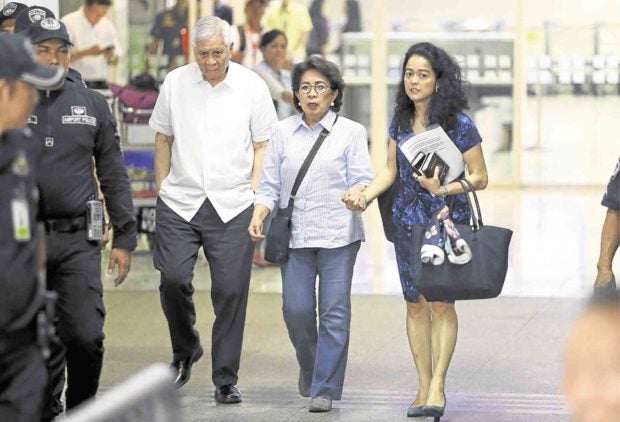 Morales said she was stopped by immigration authorities and was held in a room at Hong Kong’s airport for about four hours and ordered to take a flight back to Manila.

Morales, her husband, children and grandchildren had planned to take a vacation for five days in Hong Kong, her lawyer Anne Marie Corominas said earlier Tuesday.

The family arrived at 12:20 p.m., but Morales was stopped at the airport by immigration authorities.

“They said she was a security risk. But how can a 78-year-old former anticorruption official, with a pristine 52-year public service record, be a security threat or risk to them?” Corominas said.

Morales, in a phone conversation with The Associated Press, said Hong Kong airport and immigration officials later told her “there was a mistake” and that she could proceed with her trip to Hong Kong, but she and her family had already decided to return home because of the incident.

“I have never been subjected to this kind of humiliation,” Morales told AP while waiting for her return flight to Manila.

She said she and her family did not want to take the risk of being subjected to further scrutiny.

A Hong Kong immigration official who spoke on condition of anonymity in order to discuss a specific immigration case said Morales had been admitted to Hong Kong.

Foreign Secretary Teodoro Locsin, who was in Myanmar, tweeted on Tuesday night that Hong Kong authorities later allowed Morales to enter, but she and her family had already decided to return to Manila.

“She was refused entry with airport officials saying only ‘this is an instruction,’” Locsin said.

“That is bullying,” Morales told reporters after arriving at Ninoy Aquino International Airport on Tuesday night. “If it’s not bullying, how will you call it? I think someone came up with the theory [of] shock and awe. But I wasn’t shocked and I wasn’t awed. I was just angry.”

Earlier, Malacañang asked the Department of Foreign Affairs (DFA) to provide assistance to Morales after hearing that she was being held for deportation.

Morales is a critic of the Duterte administration, but presidential spokesperson Salvador Panelo said the government extended assistance to all Filipinos abroad “regardless of political persuasion or affinity.”

Justice Secretary Menardo Guevarra said he could not think of any reason why Hong Kong would deny entry to Morales other than the complaint that she and former Foreign Secretary Albert del Rosario filed against Chinese President Xi Jinping and other senior Chinese officials in the International Criminal Court (ICC) for crimes against humanity over China’s aggressive actions in the South China Sea.

“Regardless of the reason, however, we may not question the action taken by Chinese immigration officials as the entry of foreigners or the refusal thereof is the exclusive and sovereign prerogative of any country,” Guevarra said.

In a statement issued on Tuesday night, Malacañang said it would “defer to the immigration laws and rules of other countries,” referring to Hong Kong, “much as we expect foreign nations to respect our country’s internal rules.”

Asked by reporters at the airport why she was barred entry into Hong Kong, Morales said she believed it had to do with the ICC case.

Morales and Del Rosario filed the complaint in the ICC in March over China’s “atrocious actions” on Philippine territory in the South China Sea, including building artificial islands that caused “massive, near permanent and devastating environmental damage across nations.”

They brought the complaint on behalf of Filipino fishermen and those from other countries on the South China Sea rim whose livelihood had been adversely affected by China’s aggressive actions in the heavily disputed waterway.

They urged the ICC “to initiate a preliminary examination on this matter, if only so the court can apprise itself of Chinese crimes committed not only against the Filipino people but also against people of other nations, which crimes are already known to the international community.”

The two former officials filed the information on March 17, two days before the Philippine withdrawal from the ICC ordered by President Duterte over an investigation into alleged extrajudicial killings in his brutal war on drugs took effect.

Del Rosario decried the “bullying and harassment” of Morales in Hong Kong on Tuesday.

“One of the reasons we had filed our case in the ICC is to be able to push back against the bullying and harassment that we have been encountering from our Goliath of a neighbor,” he said in a statement. —With reports from Dexter Cabalza and AP

Read Next
PH Embassy: Still no suspect in Dayag case
EDITORS' PICK
Current dominant strain of COVID-19 more infectious than original—study
Water remains our saving grace right now
EuroMillions Superdraw: A lottery draw unlike any other is coming to the Philippines
DOLE: Return of OFWs’ remains from Saudi to be ‘delayed,’ deadline moved to ‘early next week’
Smart releases Hyun Bin’s second TVC
‘Justice will be done,’ Duterte assures as he vowed probe on Jolo incident to bare ‘truth’
MOST READ
Locsin warns of ‘severest response’ if China’s army drills in SCS ‘spill over’ to PH domain
Duterte tells military: No other president looked at you the way I did
Man who stole 2 cans of luncheon meat lands in jail in Manila
VP Leni Robredo: ‘Remember, you were made for these times’
Don't miss out on the latest news and information.