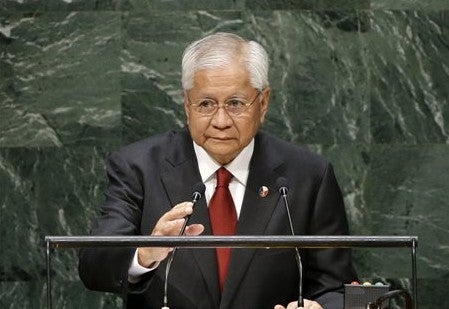 MANILA, Philippines — Former Foreign Affairs Secretary Albert del Rosario has been denied entry to Hong Kong after being held and questioned for six hours at the Hong Kong International Airport.

“After holding me for six hours, they are denying entry. That means that the diplomatic passport [I am holding] is not being honored and they refused to give the reason why,” Del Rosario told Juliet Javellana, Associate Publisher of the Philippine Daily Inquirer, in a phone interview.

Corominas added that Del Rosario is currently boarding his flight back to Manila and will arrive at 4:25 p.m on Friday.

Del Rosario and former Ombudsman Conchita Carpio-Morales filed a case for crimes against humanity before the International Criminal Court against Chinese President Xi Jinping in March.

Both were held and questioned at the Hong Kong International Airport in separate occasions.

Del Rosario was held at the Hong Kong airport when he arrived there at 7:40 a.m. this Friday while Carpio-Morales experienced the same ordeal when she traveled to Hong Kong on May 21.

Del Rosario earlier said in an interview with dzMM that his “detention” at the airport by immigration authorities is “beginning to look like plain and simple harassment.” (Editor: Jonathan P. Vicente)

Read Next
DTI chief: No need to raise sinking of PH boat in WPS at Asean summit
EDITORS' PICK
‘Justice will be done,’ Duterte assures as he vowed probe on Jolo incident to bare ‘truth’
Smart releases Hyun Bin’s second TVC
DOLE: Return of OFWs’ remains from Saudi to be ‘delayed,’ deadline moved to ‘early next week’
EuroMillions Superdraw: A lottery draw unlike any other is coming to the Philippines
Current dominant strain of COVID-19 more infectious than original—study
Water remains our saving grace right now
MOST READ
Locsin warns of ‘severest response’ if China’s army drills in SCS ‘spill over’ to PH domain
BREAKING: Duterte signs anti-terror bill into law
Duterte tells military: No other president looked at you the way I did
INQ animated bar graph: How severe is COVID-19 in Southeast Asia
Don't miss out on the latest news and information.