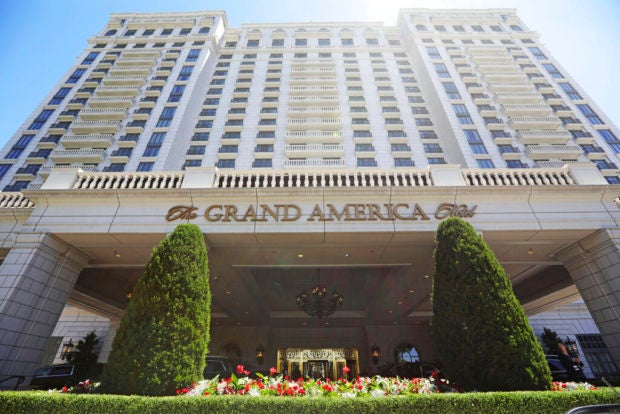 SALT LAKE CITY — A lawsuit filed Tuesday accuses the luxury Grand America Hotel in Salt Lake City of luring workers from the Philippines to a program that promised training and cultural immersion but instead forced them to work long hours doing menial jobs for low pay.

The hotel misused a type of visa similar to an internship program and instead treated participants like normal workers to avoid travel costs and other fees, according to the lawsuit filed by four workers represented by Asian Americans Advancing Justice and other organizations.

“This conduct is a blatant, greed-driven and illegal perversion of this country’s immigration laws,” David Seligman, executive director of Towards Justice, a Denver-based nonprofit law firm helping with the lawsuit, said in a news release.

The Grand America Hotel opened a year before the 2002 Winter Olympics and is considered one of the most lavish in Utah. Past presidents have stayed in the hotel that often hosts major political gatherings and important conferences.

The hotel is the flagship of the Grand Hotel and Resorts company, which also owns four Little America hotels in Western states, according to the hotel’s website.

The J-1 visa program is intended to give foreign workers who can be scholars, teachers, camp counselors and au pairs training and experience in those fields in the United States.

The four plaintiffs — Jann Descanzo, Veronica Bondoc, Glen Segundino and Marianne Ponio — studied tourism in the Philippines and came to learn about the hospitality industry in the United States.

They each paid their travel costs and recruitment fees of more than $3,000 each, the lawsuit says.

The lawsuit claims the hotel didn’t make good on promises of providing supervised training about aspects of the American hospitality industry. They were supposed to get experience working in five different parts of the hotel, but were usually stuck in only a few.

The hotel forced the Filipino staffers to work up to 60 hours a week and do less desirable jobs than other employees, it alleges. Supervisors called them “slow” and “lazy,” and threatened with deportation when they complained about the hotel not following the internship plans, the lawsuit alleges.

They were promised the chance to go to a Dickens Christmas festival, a winter solstice festival, the zoo, and a dance festival as cultural experiences, but that didn’t happen.

Attorneys believe there are at least 100 workers who endured similar treatment in the program, which is why they are seeking to make it a class-action lawsuit.

The hotel should have been using a different immigrant work program, the H-2B visa, to bring in the workers, the attorneys argue. In that program, the hotel would have to cover travel costs.

They cited a 2011 Homeland Security investigation that found the Grand America Hotel was employing 133 workers without proper documentation to work in the United States. The hotel agreed to pay $2 million for the violations, according to a Department of Justice news release.

“Stymied in their attempts to use undocumented labor, defendants turned to non-immigrant visa programs, including the J-1 visa internship program, to import cheap foreign labor to operate the hotel,” the lawsuit says.