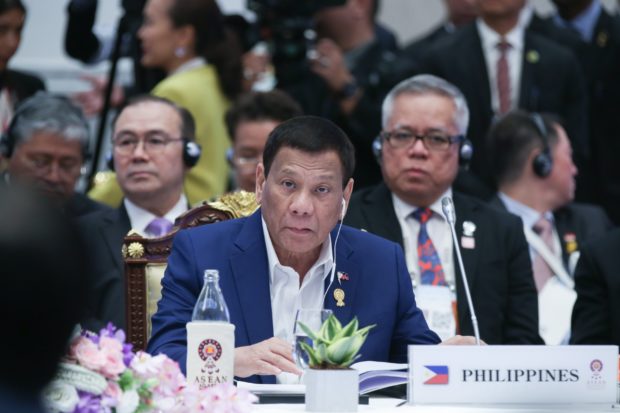 FULL ATTENTION President Duterte listens as he waits for his turn to speak at the plenary session of the 34th Association of Southeast Asian Nations Summit. —MALACAÑANG PHOTO

Speaking at the plenary session of the 34th Asean Summit, the President said the bloc has “made significant strides in our community building efforts.”

“But we face sobering realities that challenge our established order,” the President said.

“Terrorism, violent extremism and transnational crimes continue to threaten our security. They divide our communities, destroy families and undermine the growth we fought hard to achieve,” he said.

“Illegal drugs, in particular, corrode the very fabric of our societies. We must redouble our collective efforts to counter these threats effectively and with finality,” he added.

The President made the remarks after Asean leaders agreed on a Vision Statement on Partnership for Sustainability, which mapped plans to enhance regional security against threats from the Islamic State and other terror groups.

Regional security, particularly piracy and terrorism in the high seas, was also the theme of the President’s remarks at the Brunei-Indonesia-Malaysia-Philippines East Asean Growth Area Summit on Sunday.

The Philippines, Indonesia and Malaysia agreed in 2016 to launch Trilateral Maritime Patrols (TMP) in the Sulu-Celebes Seas after maritime attacks by the terrorist Abu Sayyaf Group.

The patrols were launched in June 2017 and the navies of the three countries lauded the TMP initiative for improving communication and information exchange among the fleets.

However, Malacañang has not confirmed whether the country would participate.

In the vision statement, Asean leaders agreed to pursue negotiations for an Asean extradition treaty, which would boost their capacity to combat transnational crimes.

The leaders said they would “cooperative effectively with partners within and beyond the region to combat terrorism in all its forms and manifestations as well as prevent and counter the rise of radicalization and violent extremism.”