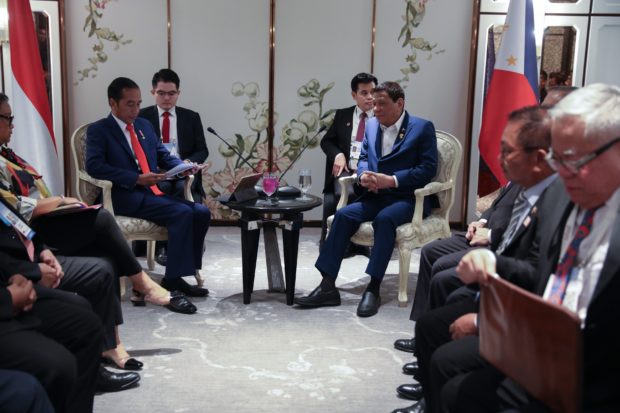 PRODUCTIVE TALKS President Duterte holds a bilateral meeting with Indonesian President Joko Widodo on the sidelines of the 34th Association of Southeast Asian Nations Summit at the Athenee Hotel in Bangkok on Saturday. —MALACAÑANG PHOTO

BANGKOK, Thailand — The Philippines and Indonesia agreed to narrow their trade imbalance, currently in favor of Jakarta, by allowing more Philippine products into the Indonesian market.

President Rodrigo Duterte and Indonesian President Joko Widodo forged the agreement during bilateral talks on Saturday evening on the sidelines of the 34th Summit of the Association of Southeast Asian Nations (Asean).

Government data showed that Indonesia exports $1 billion worth of products, mainly palm oil, to the Philippines while Manila is only allowed to export $50 million mainly due to import restrictions.

The Philippines also agreed to reconsider its import restrictions on instant coffee from Indonesia after coffee maker PT Mayora Indah Tbk reaffirmed its commitment to build an $80-million coffee production and processing facility in Batangas province.

The two countries forged the agreement amid the detrimental effects of the US-China trade war on Asean states.

“[The US-China trade war] is taking a toll on global growth. And it could hinder the ongoing process of economic integration,” President Duterte said at the Asean’s plenary session on Saturday evening.

“The US and China must both take the high road resolve their differences before the situation spirals out of control. And we in Asean must strengthen our support for a rules-based and open multilateral trading system,” he added.

“We must reject the zero-sum approach to international economic relations. In pursuit of growth, we should be partners not competitors,” the President said.

“We will have this regional free trade agreement that can still improve the trading … and somehow be partially insulated from the impact of what’s going on between US and China,” Lopez said.

He said the issues hindering the conclusion of the RCEP could be resolved by September and the deal concluded by November.

“As much as we want to liberalize everything, not all countries would be in the same stage in its continuing process of liberalization,” he added.

Thailand, the summit host and current Asean chair, has been pushing for the conclusion of the RCEP pact within the year.

Aside from the trade deal, Duterte and Widodo also discussed the implementation of the landmark 2014 agreement defining the the two countries’ Celebes Sea border after 20 years of negotiations.

The agreement was ratified by the Indonesian legislature in 2017 but the Philippines only ratified the pact on June 3.

In a joint press release, the Philippines and Indonesia described the agreement as “a valuable example of the peaceful and rules-based settlement of maritime borders in accordance with 1982 United Nations Convention on the Law of the Sea.”