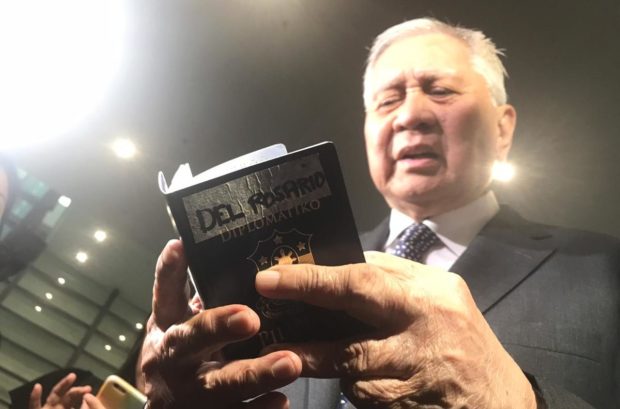 Del Rosario said this after being detained for six hours in Hong Kong before being deported back to the Philippines last June 21.

“I went to Hong Kong with a diplomatic passport, was held for six hours, denied entry, and then summarily deported,” Del Rosario said in a statement.

“What is the significance of the aforementioned? My diplomatic passport carries the seal of the Republic of the Philippines. To show disrespect for the passport bearer is to disrespect the Republic,” he added.

READ: Del Rosario says he notified DFA about use of diplomatic passport

According to Del Rosario, diplomatic passports are given to former foreign affairs secretaries “as a courtesy and as recognition for dedicated service to our country.”

“A small thank you, it is, for our diplomatic warriors,” Del Rosario said.

Following the incident, however, the Department of Foreign Affairs (DFA) canceled all diplomatic passports issued to its former top diplomats.

“The DFA Office of Consular Affairs (OCA) will be issuing an order shortly, canceling all courtesy diplomatic passports, and requiring their surrender for physical cancellation,” a statement issued by the DFA read on Saturday.

While Del Rosario said he would not challenge the order, he sought the “real reason” as to why the passports were taken back.

“For the likes of me, I cannot think of one good reason why this is happening. What is the real reason then for taking back what has already been given?” Del Rosario said.

“What has changed in one long day?” he added.

Del Rosario then called for public officials to defend the country’s seal.

“The matter then becomes a legitimate issue for the state to deal with and defend its seal. For that we should rely on our public officials,” Del Rosario said.

“They should address the disrespectful party and not consequence our former SFAs (secretaries of foreign affairs) and former ambassadors by using them to distract from the real issue and what we must do,” he added.

Del Rosario also hinted the possibility of detaining and deporting a diplomat from the responsible state.

“Will we be afraid to even think of this? Will we again be acquiescent?” Del Rosario said.

Read Next
Duterte thanks Vietnamese fishermen for saving Filipinos
EDITORS' PICK
SM prepares for ‘safe malling’
LIST: What to expect in areas under GCQ, MGCQ
DOTr bares 2 phases of public transport revival in GCQ areas
Notice of 2020 regular meeting of stockholders June 18, 2020
Leveling up your ‘lutong bahay’ with the kitchen companion you never knew you needed
Drilon wants repeal of penal provisions in proposed Bayanihan extension law
MOST READ
LIST: What to expect in areas under GCQ, MGCQ
DOH explains: Only 109 of record-high 539 COVID-19 patients were ‘fresh cases’
Duterte approves Metro Manila’s shift to GCQ starting June 1
300 buses to resume operations in NCR by June 1 — Año
Don't miss out on the latest news and information.