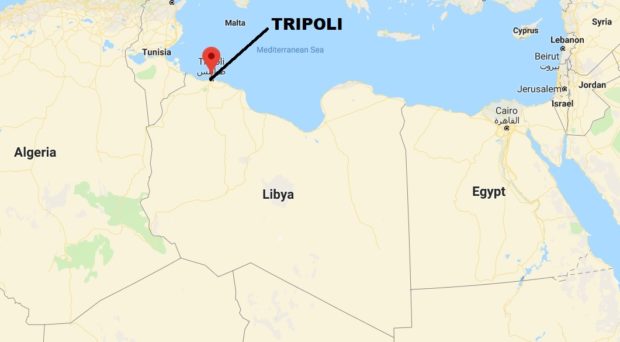 MANILA, Philippines — The Department of Foreign Affairs (DFA) appealed on Wednesday to families of Filipinos in Tripoli to convince their relatives to relocate to safer areas as the battle for control of the Libyan capital continues.

“We reiterate our appeal to families in the Philippines of Filipinos working in areas near Tripoli where heavy fighting has been taking place to convince their loved ones to relocate to safer areas or to seek shelter at Philippine Embassy in Libya while they still can,” Chargé d’Affaires Elmer Cato said in a tweet.

We reiterate our appeal to families in the Philippines of Filipinos working in areas near Tripoli where heavy fighting has been taking place to convince their loved ones to relocate to safer areas or to seek shelter at @PhinLibya while they still can. @teddyboylocsin @DFAPHL

Cato, in an earlier tweet, also noted the repeated sound of gunfire heard from the Philippine Embassy in Libya, which he compared to the crackle of New Year’s Eve firecrackers in the Philippines.

That’s quite a lot of boombooms since this morning. It’s still ongoing. Haven’t heard that many except New Year’s Eve in the Philippines. Could hear and feel the explosions but we could not see them from @PhinLibya. @teddyboylocsin @DFAPHL pic.twitter.com/ZmfgnX7o9h

He also related how a Filipina living near the frontline describe the trading of gunshot as the “sound of music.”

The DFA has raised Alert Level 4 in Tripoli mandating the repatriation of Filipinos from the Libyan capital and nearby areas. (Editor: Cenon B. Bibe Jr.)