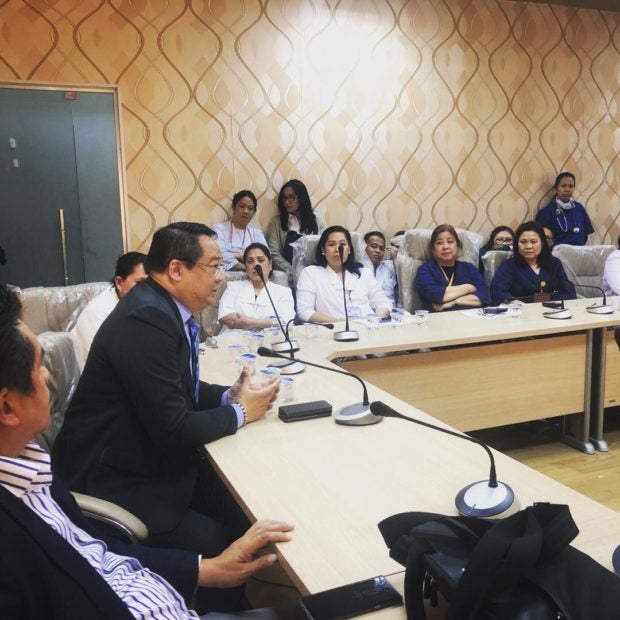 Chargé d’Affaires Elmer Cato and Labor Attaché Adam Musa meet with Filipino nurses at the Oil Clinic of the National Oil Company to convince them to return to the Philippines in view of the escalating fighting in the outskirts of Tripoli. Photo by Jasmine De Guzman/Philippine Embassy in Tripoli

MANILA, Philippines — The Philippine Embassy in Tripoli, Libya met with Filipinos reently to convince them to return to the Philippines, the Department of Foreign Affairs (DFA) said.

In a statement issued on Monday, the DFA said that the Philippine Embassy in Tripoli “has doubled its efforts to convince Filipinos who may get caught in the crossfire of the escalating violence there to go home.”

The DFA added that the embassy has also “been reaching out to Filipinos in churches, hospitals, offices and even houses to convince them to consider getting themselves repatriated.”

Chargé d’Affaires Elmer Cato, the DFA said, paid a visit to Filipino nurses on Sunday in the the University of Tripoli Medical Center and the Oil Clinic of the National Oil Company, which are the two major hospitals in the Libyan capital.

Cato visited the said Filipinos “to check on their situation and to reiterate [the] government’s offer to bring them home.”

While none of the Filipino nurses accepted the embassy’s offer, Cato said the embassy “will not give up and will continue to convince Filipinos to go home just to make sure they are out of harm’s way before fighting reaches the capital,” the DFA added.

Cato noted that only 19 out of the 1,000 Filipinos in Tripoli have so far expressed interest in being repatriated while 49 others were evacuated by their employers to “safe locations in areas outside the scene of heavy fighting since last week.”

Last April 8, the DFA raised Alert Level III in Tripoli and adjacent districts amid the rising tension in Libya.

Under the Alert Level III or the voluntary repatriation phase, Filipinos working in Libya but are currently in the Philippines will not be allowed to travel back to the country “until the situation in the country stabilizes, and the alert level is lowered back to II.”