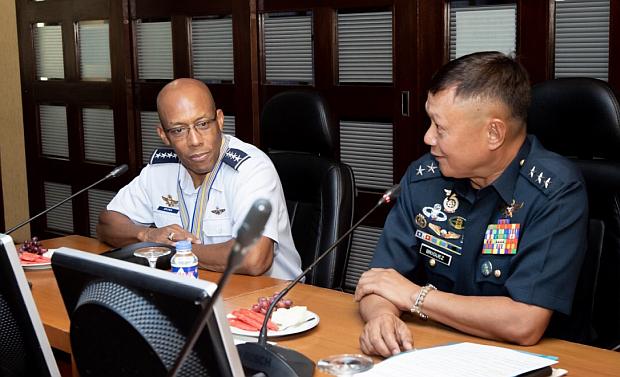 MANILA, Philippines — US Pacific Air Forces commander Gen. Charles Brown Jr. just concluded his first official visit to the Philippines to reiterate the US commitment to its bilateral relationship with the Philippines and to discuss increasing multilateral training opportunities.

He met with top military officials, including Armed Forces chief Gen. Benjamin Madrigal Jr. and Air Force chief Lt. Gen. Rozzano Briguez. He also visited Basa Air Base and Clark Air Base in Pampanga as part of his visit from May 15 to 17.

“Consistent engagement with our partners allows me to gain awareness or their unique perspectives, my perspectives and our shared military capabilities,” Brown told reporters Thursday.

“We’re finding ways to better integrate and to better train together,” he added.

Brown said some of the topics he discussed with his meeting with Briguez were rebuilding the Air Force fighter capability, working together, building command and control, and humanitarian assistance, among other things.

This includes the Bilateral Air Contingent Exchange-Philippines last January. The US brought in their F-16 fighter jets to fly with the Philippines’ FA-50s for the air combat training in Basa Air Base.

“We had the chance to fly together. Not only fly together but our pilots get to talk to the Philippine Air Force pilots and our maintainers. So it’s building a relationship,” he said.

“It’s when we exercise and train together that’s where we learn from each other,” Brown added.