Cyprus toxic lake scoured as probe into killings of 4 Filipinas, 3 others continues 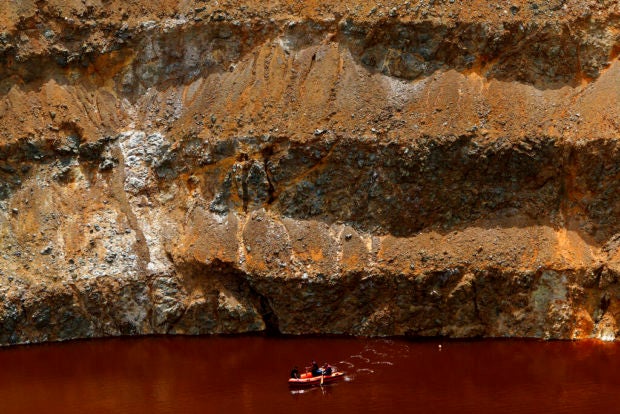 Members of the Cyprus Special Disaster Response Unit in boat search for a suitcase in a man-made lake, near the village of Mitsero outside of the capital Nicosia, Cyprus, Tuesday, April 30, 2019.  (AP)

MITSERO, Cyprus  — British forensics experts helping to tackle the Cyprus serial killer case visited a toxic lake Tuesday where a suitcase was found with a decomposed body inside as criticism mounted of how Cypriot police initially handled the disappearances of several victims.

The Cypriot police chief and leading investigators briefed the experts from Scotland Yard on the investigation into the killings of seven foreign women and girls, four of them were Filipinos, police spokesman Andreas Angelides said.

The toxic lake is where the suspect — a 35-year-old Cyprus army captain — told investigators he dumped three of his victims after putting them inside suitcases.

The body of an adult woman inside a suitcase weighed down by a cement block was retrieved Sunday from the lake. But authorities have had difficulty locating the other two suitcases, despite using a robotic camera, because of very poor visibility in the lake that is part of a disused copper pyrite mine.

Angelides said investigators have several options on how to proceed with the search if the current camera method doesn’t produce results on the eastern Mediterranean island.

A high-tech sonar device will be employed in the coming days to provide detailed images of what lies at the bottom of the lake. It will also be used at another reservoir where the suspect told investigators he dumped a child’s body, the daughter of one of his victims.

He said evidence investigators have gathered so far does not indicate that the suspect is linked to any more than the seven people he’s already confessed to killing.

But Angelides deflected criticism that police botched the initial missing persons’ reports, saying that an internal investigation is underway. Some of the women had been missing for years.

“From the moment that the investigation began, I believe that no other questions should be answered,” he told reporters.

Only one victim has been positively identified — 38 year-old Mary Rose Tiburcio from the Philippines. The suspect says that he dumped Tiburcio’s 6-year-old daughter Sierra in the reservoir.

Investigators said the other victims include two Filipino women, a Romanian woman and her 8-year-old daughter and a woman believed to be from Nepal. Cypriot media identified the Filipinas as 28-year-old Arian Palanas Lozano and 31-year-old Maricar Valtez Arquiola.

READ: At least 3 Filipinas among those murdered by Cyprus serial killer

Philippine diplomats met with the Cypriot ministers of foreign affairs and justice as well as with top police brass to inquire about the investigation.

The Romanian woman and her daughter — who Cypriot media identified as Livia Florentina Bunea, 36, and Elena Natalia Bunea, 8 — have been missing since September 2016.

State TV journalist Gogo Alexandrinou said during the disappearance of Bunea and her daughter, police told her they had reason to believe the two had gone to the breakaway Turkish Cypriot side of the ethnically split country. She said they did not elaborate on that evidence.

Police Supporters’ Association chief Neophytos Papamiltiadous told state TV on Tuesday that although he thought law enforcement authorities were doing an excellent job now, anecdotal evidence suggests the officers who first handled the missing persons’ reports didn’t do their jobs properly. He also said it would have been better if the committee probing police actions on this case had been appointed from outside the police force.

Several political parties have asked for both the justice minister and the police chief to step down.