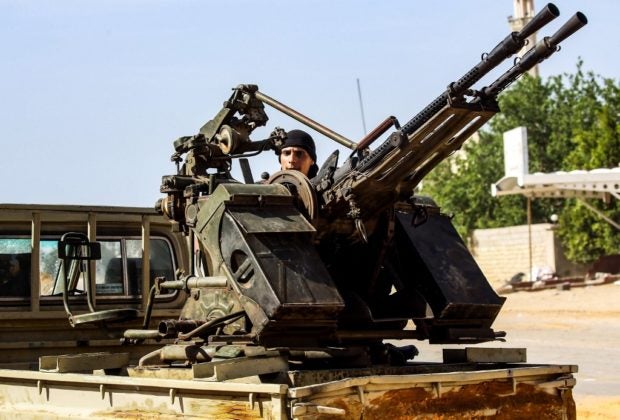 SAN FERNANDO CITY, Pampanga, Philippines — The Department of Foreign Affairs (DFA) has raised Alert Level 4, or mandatory repatriation, in the Libyan capital of Tripoli and in nearby areas.

In a tweet on Wednesday, DFA Secretary Teodoro Locsin Jr. said he informed President Rodrigo Duterte on Tuesday that he “raised the Alert Level to 4 in Tripoli + 100 kms around.”

Yesterday informed President that I raised the Alert Level to 4 in Tripoli + 100 kms around. More mortar fire, more Filipinos hurt. AL 4 is mandatory evacuation but we cannot compel—and rightly so. What is mandatory is that DFA stays in Tripoli until last OFW goes—& then it stays

“More mortar fire, more Filipinos hurt. [Alert Level] 4 is mandatory evacuation but we cannot compel—and rightly so. What is mandatory is that DFA stays in Tripoli until last OFW (overseas Filipino workers)  goes—& then it stays,” Locsin added.

In a statement, the DFA said the “increased threats to the safety and security” of the more than 1,000 Filipinos who are still in Libya prompted the department to elevate the alert level in Tripoli and surrounding areas from III to IV.

“Foreign Affairs Secretary Teodoro L. Locsin Jr. raised the alert level upon the recommendation of the Philippine Embassy in Tripoli which said the current situation on the ground could no longer guarantee the safety and security of Filipinos who chose to remain despite repeated appeals for them to go home,” the DFA said.

“Chargé d’Affaires Elmer G. Cato said the fighting in the outskirts of Tripoli will also soon make it difficult for the Embassy to respond to urgent requests for assistance from distressed nationals,” he added.

Quoting Cato, the DFA said the embassy will “redouble its efforts in persuading Filipinos to go home” with the declaration of Alert Level 4.

“The new alert level, which covers only Tripoli and other areas within a 100-kilometer radius from the capital, was raised after a number of Filipinos suddenly found themselves in the middle of fierce fighting on Monday,” the DFA said.

“It also followed the shelling of several hospitals and residential areas that left at least two Filipinos wounded,” it added.  /muf

READ: Another Filipino hurt as violence in Libya escalates – DFA