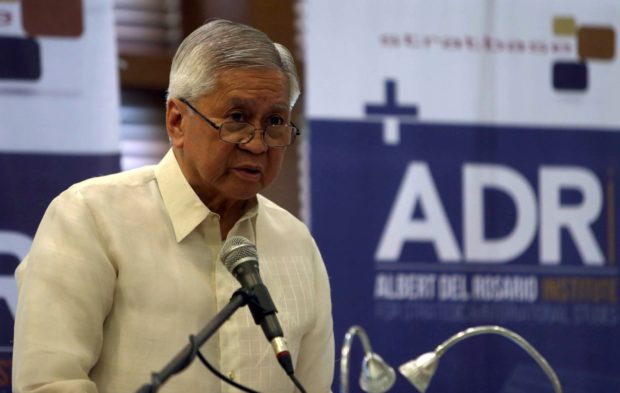 In respectful response to the remarks of the presidential spokesperson, during the impasse at Scarborough Shoal with China in 2012, we were approached by the U.S., an honest broker for both China and the Philippines, to agree to a simultaneous withdrawal of ships from the shoal. China had over 30 ships while the Philippines had a total of 1 ship. We ultimately agreed to the U.S. proposal. At the appointed time, we withdrew, whereas China – acting with duplicity – did not. When confronted with the non-withdrawal of their ships, Beijing’s response was a denial of the existence of such an agreement.

On shelving of the arbitral tribunal ruling

The presidential spokesperson has declared that the arbitral ruling was never shelved. Our records would indicate otherwise as, for examples:

• 29th of August 2016 (Speech of PRRD during National Heroes’ Day) – PRRD (President Rodrigo Roa Duterte) declared ““I will not use the judgment arbitral now. But I would one day sit in front of your representative or you and then I will lay bare my position. And I would say that, “this paper, I cannot get out of the four corners of this document.” And that is the arbitral judgment.”

• 17th December 2016 (PRRD comment during a news conference after his arrival from state visit to Cambodia and Singapore) – PRRD stated “In the play of politics now, I will set aside the arbitral ruling.”

• 19th of March 2017 (Speech of PRRD to the Filipino community in Myanmar) – PRRD declared “But I would like to tell you now that during my term, there will be a time where I have to confront you about this paper, the arbitral ruling. It will not go beyond the four corners of this document.”

• 19th of March 2017 (Departure speech of PRRD on his official visit to Myanmar and Thailand) – PRRD stated “Ako, mga Cabinet members and I said, “I will not invoke the arbitral ruling now. But there will be a time in my term when I will bring the issue back on the table on the four square of the arbitral ruling and it will come.”

• 30th May of 2018 – National Security Adviser said that PRRD has decided to temporarily shelve the tribunal ruling.

Presidential spokesperson has also declared that “In the first place, this administration never shelved the arbitral tribunal. It only remains unenforceable because no foreign force seems persuaded to help us enforce it.”

On threat of war

To the deep dismay of our people, by continuing to shelve the tribunal outcome, our government has persisted in allowing China to deprive our citizens of what is ours. We are still succumbing to threats of force including a threat of war. Surprising as it may sound, according to Professor Amitav Acharya of the American University, war is not even a good option for China. Its economy is heavily reliant on global trade, including its fuel supply, which needs open shipping lanes such as the Malacca Strait and the Indian Ocean which are dominated by US naval power.

Finally, the thought that war is the only alternative to setting aside the Arbitral decision cannot possibly be serious in this modern world.

On the presidential spokesperson

Is the presidential spokesperson credibly asserting our rightful position against China? If he is not doing this, what in heaven’s name is he doing?

Giving deference to the SFA’s wishes, we are committed to ceasing any further comments.