ICC to continue probe of killings 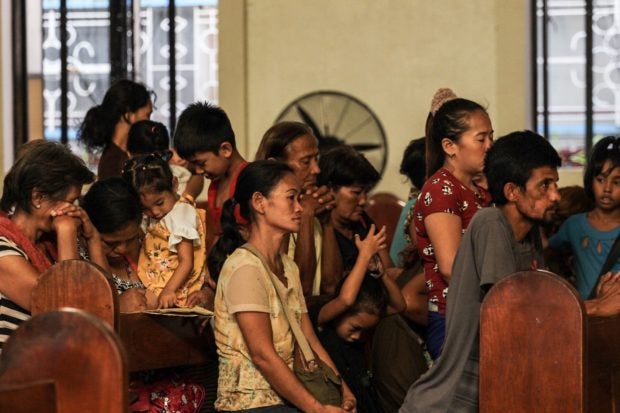 BEREAVED Families of alleged extrajudicial killings gather on Dec. 7, 2018 at the San Roque Cathedral in Caloocan City to hear Mass in commemoration of the Universal Declaration of Human Rights. —JAM STA. ROSA

Unfazed by Malacañang’s warning, International Criminal Court (ICC) prosecutor Fatou Bensouda would continue to look into extrajudicial killings attributed to President Rodrigo Duterte’s antidrugs campaign and assess whether she would open an investigation.

Bensouda said the ICC retained jurisdiction to prosecute the Duterte administration for any crimes of humanity committed before the Philippines withdrew from the international treaty that created the court.

“My office’s independent and impartial preliminary examination into the situation in the Philippines continues,” said Bensouda in a statement Tuesday confirming the Philippines’ withdrawal.

Pointing to the Rome Statute’s Article 127.2 and a prior ICC ruling for Burundi, she stressed said the ICC “retains its jurisdiction over crimes committed during the time in which the state was party to the statute.”

The ICC “may exercise its jurisdiction even after the withdrawal becomes effective,” she added.

Bensouda has been denigrated by the President and his officials since she announced last year that her office would conduct a “preliminary examination” into the complaint filed by lawyer Jude Sabio for crimes against humanity allegedly committed under the President’s war on drugs.

The ICC can prosecute genocide, war crimes and crimes against humanity.

The Philippines’ withdrawal from the Rome Statute took effect on March 17 after the one-year notice.

But the Palace on Tuesday scoffed at Bensouda, saying she would be violating the Rome Statute for stating that the ICC would continue to investigate even after the Philippines had withdrawn from the treaty.

“As I said, if she does it that means she is violating the Rome Statute,” presidential spokesperson Salvador Panelo said of Bensounda.

Panelo said the ICC prosecutors cannot come into the country because they will be intruding into Philippine sovereignty if they investigated here.

Rights group Human Rights Watch (HRW) said the withdrawal of the Philippines from the ICC was an “act of desperation” by the President.

“Duterte may think that his country’s withdrawal from the ICC is a show of strength,” said Param Preet Singh, HRW associate director for international justice program.

In a statement, Singh reminded the President that despite the withdrawal, the ICC could still probe his responsibility for the thousands of extrajudicial killings under his term.

Read Next
PH, Vietnam agree not to arrest fishermen in each other’s waters
EDITORS' PICK
DOH says COVID-19 cases plateauing, but public shouldn’t be ‘complacent’
Look Through: The fate of impounded stray dogs
House energy committee chair Arroyo bats for cheap electricity
23,000 cops to be deployed nationwide for school reopening
Unleash the photographer in you this World Photography Day with vivo smartphones
What to watch out for when selecting a video surveillance solution
MOST READ
Sharon Cuneta asks for prayers for friend in ICU who suffered silent stroke
Korina Sanchez reunites with former ABS-CBN co-anchors Julius Babao, Cheryl Cosim
Solons file resolutions seeking probe on ABS-CBN, TV5 merger
NTC asks Court of Appeals to reconsider decision on Newsnet franchise
Don't miss out on the latest news and information.