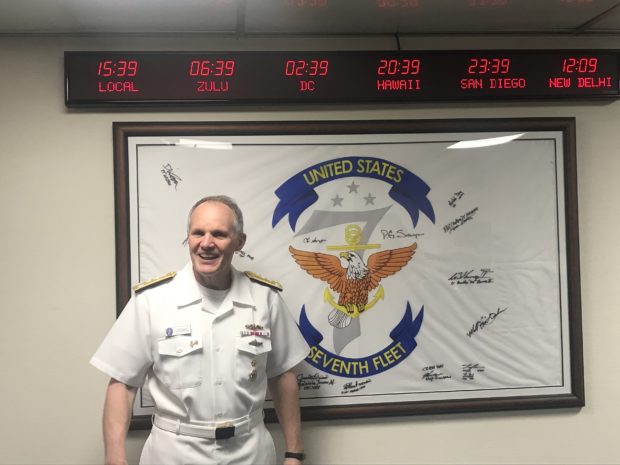 WHY WE’RE HERE Facing reporters on board the USS Blue Ridge on Monday, Vice Adm. Phillip Sawyer, US 7th Fleet commander, says freedom of navigation in the South China Sea is part of Washington’s national interest. —JEANNETTE I. ANDRADE

Despite a near-collision between American and Chinese warships last year, the United States will continue its freedom of navigation operations, or Fonops, until there are no longer “excessive maritime claims” anywhere in the world, according to a top US Navy official.

“It’s simply to make sure that the international rights, not just of the United States but for all countries, are reinforced for everybody,” said Vice Adm. Phillip Sawyer, commander of the US 7th Fleet.

“What we do in the South China Sea, we do elsewhere so it really is the same across the world,” Sawyer told reporters on Monday aboard the USS Blue Ridge, his flagship, which arrived in Manila last week for a visit after sailing through the South China Sea.

Asked when the Fonop mission might be considered accomplished, he said: “It is continuing. We are continually working on that aspect of it and we will continue to do it until there are no longer excessive maritime claims throughout the world. I don’t know when that will be.”

China claims nearly all of the South China Sea, one of the world’s busiest waterways where decades of maritime disputes have been simmering among China, the Philippines, Taiwan, Vietnam, Malaysia and Brunei.

Washington has also questioned China’s expansive claims, bringing it into a collision course with Beijing.

Sawyer said the US Navy made no changes on how to conduct its Fonops despite the near-collision between a US destroyer and a Chinese missile destroyer in October last year.

The USS Decatur had sailed within 22 kilometers of Gaven Reef when China’s Luoyang approached within 41 meters of its bow, forcing the American warship to change course to avoid a collision.

US officials also said the Chinese warned the Decatur to leave the area.

According to Sawyer, the US Navy has conducted several sail-bys after that incident for which Washington had called out Chinese leaders for the “unprofessional behavior.”

He expressed concern over China’s land reclamation and militarization of features in the strategic waterway.

“Not just me, I think there are many navies and countries that are concerned … and probably because of the lack of openness there,” he explained.

Gaven, one of seven reefs transformed by China into militarily fortified islands in recent years, is claimed by China, the Philippines, Vietnam and Taiwan.

The United States has no claims in the South China Sea, but it has declared that freedom of navigation and the peaceful resolution of the maritime disputes are in its national interest.

“The world needs the goods and the commerce to flow. So pick your body of water, blocking them illegally should be a concern to the entire world, not just the US Navy, not just the United States, not just the Philippines,” Sawyer said.

“It (Fonop) provides security for the area and security provides stability and stability allows the countries in the area, in the region to truly be able to focus a little more inward and to focus on things that are bettering their peoples than having to worry about things that are going on outside their borders,” he added.

The US 7th Fleet, based in Yokosuka, Japan, is part of the US Pacific Command, which is tasked mainly with providing joint command in natural disasters or military operations and operational command of all American forces in the Asia-Pacific region, including the South China Sea and the East China Sea.

Sawyer said the United States was engaging the Philippines and other countries in the region in bilateral or multilateral military exercises for various purposes, including improving interoperability of their armed forces.

Sawyer said American ships had tried to conduct drills with other navies even while they were en route to a particular destination for scheduled exercises, citing drills with Philippine ships as they sailed for Hawaii for last year’s Rim of the Pacific (Rimpac) Exercise.

Discussions were under way with the Philippine Navy on drills this year and in 2020, he said.

This year the 7th Fleet is taking part in the ongoing Pacific Partnership in Tacloban City, a two-week humanitarian and civic assistance mission focused on disaster preparedness and resiliency.

It will also send two ships for the Balikatan exercises, which will start on April 1, and will participate in the Maritime Training Activity Sama-Sama in June or July, and the Southeast Asia Cooperation and Training, or Seacat, in August.