PH, Vietnam agree not to arrest fishermen in each other’s waters 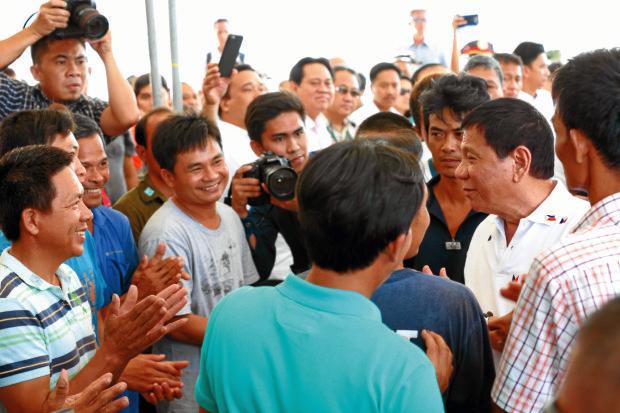 President Rodrigo Duterte bids farewell to 17 Vietnamese fishermen who were caught fishing off Ilocos Sur province after charges of poaching against them were dismissed by the provincial prosecutor in November 2016. (File photo by JOAN BONDOC / Philippine Daily Inquirer)

CLARK FREEPORT — The Philippines and Vietnam have reached a verbal agreement not to arrest fishermen encroaching in each other’s fishing grounds.

This issue was raised during the official visit of Defense Secretary Delfin Lorenzana to Vietnam last week.

“It brings a lot of trouble. So kung meron tayong makikita dyan, just warn them: ‘You are in Philippine waters, please go back to your area.’ In like manner, kung andun naman sa kanila yung fishermen natin, just tell them to go back. Kasi hindi naman alam ng fisherman eh, wala naman silang GPS,” Lorenzana told reporters on the sidelines of turnover ceremony for Japan’s donation of Huey spare parts to the Philippine Air Force on Tuesday.

[It brings a lot of trouble. So if we see (illegal fishers), just warn them: ‘You are in Philippine waters, please go back to your area.’ In like manner, if our fishermen are in their area, just tell them to go back. Because the fishermen wouldn’t know, they are not equipped with GPS.]

Lorenzana said the fishermen might not be aware that they are intruding beyond their own waters so they should be sent back home instead.

He cited a case in 2016 where Vietnamese in four fishing boats were arrested in Sual, Pangasinan.

“When we let them go in 2016, humingi pa ng full tank everyone of them. Binigyan pa ng pagkain. So it brings a lot of trouble,” he said.

[When we let them go in 2016, they asked for a full tank of fuel everyone of them. We also gave them food. So it brings a lot of trouble.]

[So we agreed that if they are arrested, we will just let them go back to their area. It’s a headache. When we arrest them, we have to feed them, give them medical care. When they go home, we even have to give them fuel.]

Lorenzana said the agreement with Vietnam was only verbal.

[They’re very responsive. Kasi ang sabi namin, these fishermen are not actually very rich people. They’re actually just poor fishermen trying to earn a living so let’s not make it hard for them.]

Asked if there is a similar agreement with China, the defense chief said there was none. /atm