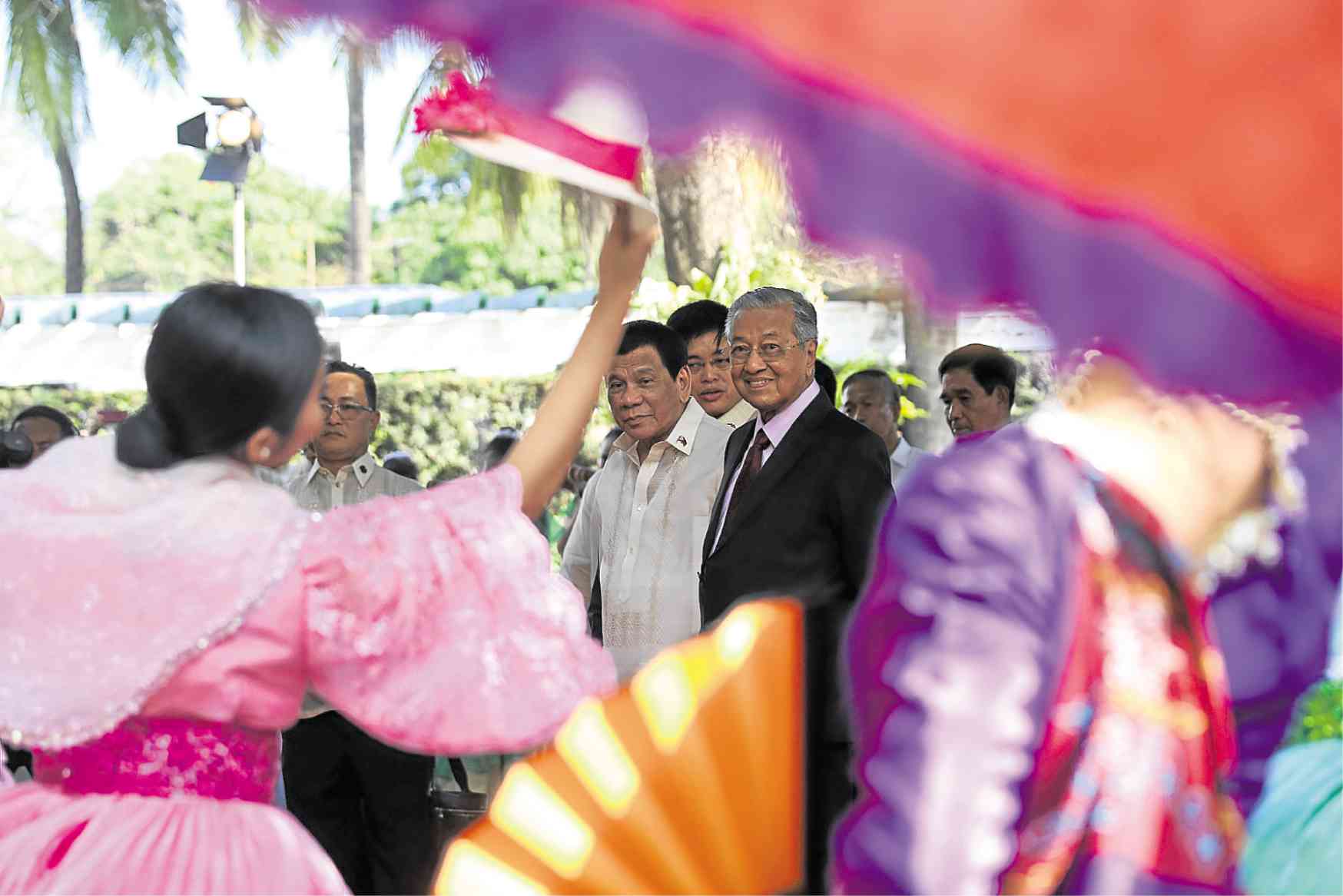 BOOSTING TIES President Duterte on Thursday welcomed Malaysia’s Prime Minister Mahathir Mohamad to Malacañang where they held talks on strengthening bilateral relations and renewed their commitment to promote regional peace and stability and freedom of navigation and overflight over the disputed South China Sea. —JOAN BONDOC

Malaysian Prime Minister Mahathir Mohamad on Thursday warned the Philippines against letting in foreigners who could “disturb the political equations” after President Duterte’s Beijing pivot sparked an influx of Chinese workers.

At least 200,000 Chinese have flocked to Manila since Duterte’s 2016 election, many of them employed by online gaming companies that cater to Chinese players, a Senate inquiry was told late last year.

This has touched off concerns, with some Filipino politicians alleging it drives up property prices, takes away jobs from locals and even affects tax revenues.

A proposal to require foreigners planning to work in the Philippines to first obtain an employment visa before they arrive in the country was made during an interagency meeting last week among representatives of the Department of Labor and Employment, Department of Finance, Bureau of Internal Revenue, Department of Justice, and the Bureau of Immigration, according to Labor Secretary Silvestre Bello III.

Mahathir, who has suspended several of his nation’s major projects with China, warned against allowing the surge of foreigners during an official visit to the Philippines.

“Foreign direct investment should not involve bringing huge numbers of foreigners to live in the country because that might disturb the political equations in the country,” he told ABS-CBN television in an interview.

“If huge numbers of any foreigners (come) to live and stay in the country or to even influence the economy of a country, then you have to do some rethinking as to whether it is good or bad, or the limits that you have to impose on them,” he said.

The Malaysian leader did not mention this warning in a statement he made after meeting with the President at Malacañang.

The two leaders, however, renewed their countries’ commitment to promote peace and safe passage through the disputed South China Sea and to cooperate in regional and multilateral platforms to advance the rule of law in Southeast Asia.

“We emphasized the importance of maintaining and promoting peace, security, stability, safety and freedom of navigation and overflight over the South China Sea, as well as the peaceful settlement of disputes,” Duterte said in a statement.

The Philippines, Malaysia, Vietnam, Brunei, China and Taiwan have overlapping claims in the South China Sea. China claims nearly all of the disputed waters.

Duterte said promoting peace and security in one of the world’s busiest sea-lanes would be done “without resort to the threat or use of force, in accordance with the universally recognized principles of international law.”

In his own remarks, the 93-year-old Malaysian leader said he and Duterte “exchanged views on a number of regional and international issues of mutual interests, such as the South China Sea and cooperation within Association of Southeast Asian Nations (Asean).”

During the Asean summit in Singapore in 2018, the Philippines was designated as the country coordinator of the dialogue between China and the regional bloc.

Commenting on the sea dispute on Thursday, Mahathir said in the TV interview that there should be no impediment to vessels using the strategic waterway, through which trillions of dollars in global trade pass each year.

“The most important thing is that the South China Sea in particular must be open to navigation,” he said.

Mahathir has taken a cautious approach to relations with China, saying he would discuss “unfair” terms of deals signed by his predecessor, Najib Razak.

Duterte’s pursuit of closer ties between China and the Philippines, a traditional ally of the United States, has prompted a surge of Chinese workers.

Last year, legislators said around 200,000 Chinese were working in the country, and vowed to introduce protection for Filipinos.

Last month, Duterte said Chinese workers should be allowed to continue staying in the country as Beijing also hosted hundreds of thousands of Filipinos. Most of them are domestic workers in Hong Kong.

Bello told reporters on Wednesday the Philippines might soon adopt a new policy requiring foreign workers to obtain a work visa before entering the country.

He said this was meant to address concerns over the influx of undocumented foreign workers.

“We agreed that before an alien can come in, they should already get a working visa from his place of origin,” he said, referring to the consensus during the interagency meeting last Friday.

Bello said a memorandum containing more details of this policy would be issued soon.

“We need to be certain that the work they (foreigners) will do here cannot be done by a Filipino,” he said. “This way, we can already control the entry of foreign workers.”

Bello said this would be the first time Philippine authorities would make a work visa a requirement for the entry of foreigners planning to work here.

Right now, he said, “anybody can come here as a tourist and then apply for a special working permit.”

“We will no longer allow that,” he said. —REPORTS FROM AFP, JULIE M. AURELIO AND TINA G. SANTOS