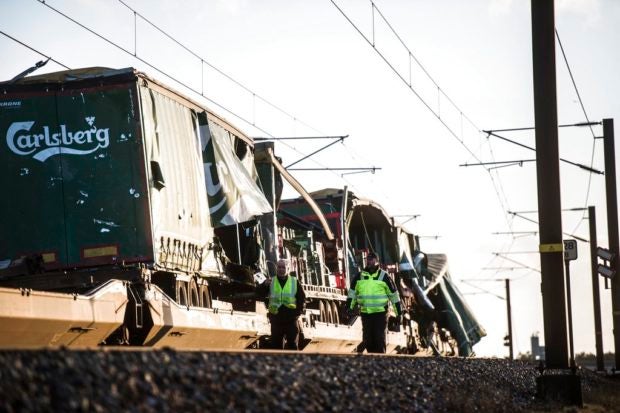 People walk near damaged cargo compartments on a train parked near the Storebaelt bridge, near Nyborg in Denmark, Wednesday, Jan. 2, 2019. Danish police say several people have been killed in a train accident on a bridge linking the central islands of Zealand and Funen. Police did not provide further details about those killed or the number of people injured in Wednesday’s incident, which took place about 8 a.m. local time. Danish media reported that a tarpaulin on a freight train hit a passenger train going in the opposite direction, prompting it to brake suddenly. (Tim K. Jensen/Ritzau Scanpix via AP)

MANILA, Philippines — The Department of Foreign Affairs (DFA) on Wednesday said that they are checking if any Filipinos were among those who were reported killed and injured in a bridge train accident in Denmark.

The DFA in a statement said that it is “monitoring the aftermath” of the accident “to check if there are Filipinos among the six people reported killed and 16 injured.”

Ambassador to Denmark Jocelyn Batoon-Garcia, according to the DFA, reported that Philippine Honorary Consul General Poul Krogh is coordinating with local authorities to determine if any of the 12,000 members of the Filipino community in Denmark are among the victims of the accident.

Batoon-Garcia noted that the accident on the Green Belt Bridge connecting the islands of Zealand and Funen involved a commuter train and a freight train, the DFA noted.