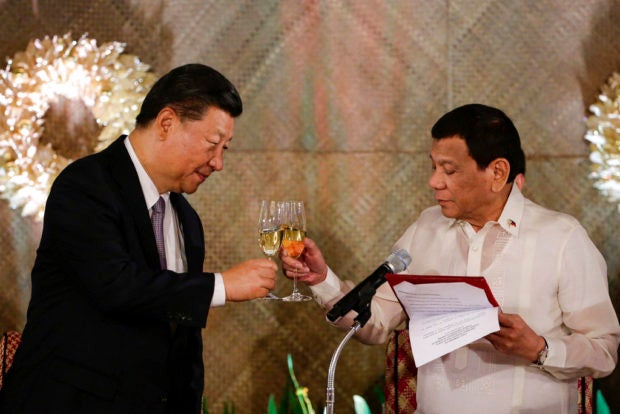 China and the Philippines will search for oil and gas in the South China Sea without affecting each other’s position on “sovereignty and maritime rights and interests” in the disputed waters, according to a leaked copy of an agreement that was expected to be signed on Tuesday in the presence of Chinese President Xi Jinping and President Rodrigo Duterte.

The document titled “Framework Agreement on Joint Maritime Oil and Gas Exploration between China and the Philippines” was leaked to opposition Sen. Antonio Trillanes IV, whose staff shared it with reporters on Tuesday.

The Inquirer has not independently confirmed the authenticity of the draft contract, which, according to Trillanes’ staff, was given to the senator by an informant.

It wasn’t clear if it was the deal signed during Xi’s visit to Malacañang on Tuesday.

Trillanes and Sen. Francis Pangilinan on Monday filed a resolution seeking a Senate inquiry into the proposed joint exploration deal between China and the Philippines in the West Philippine Sea, waters within the country’s 370-kilometer exclusive economic zone in the heavily disputed South China Sea.

Presidential spokesperson Salvador Panelo said in a statement on Tuesday that the Palace saw no problem with a Senate inquiry into the deal.

He, however, said Malacañang could not release any document related to the proposed joint venture because the agreement had not yet been signed.

But Panelo gave assurance that a joint oil and gas exploration deal with China in the West Philippine Sea would stand judicial scrutiny in both countries.

“We [give assurance] that any agreement that we will enter into with a foreign government or entity would stand the judicial scrutiny of both countries and its constitutionality, if challenged, would be upheld,” Panelo said.

“The joint oil and gas exploration shall not affect the respective position on sovereignty and maritime rights and interests of the two parties,” according to the deal.

According to the document, the agreement will be entered into by the two parties “in accordance with the principles of ‘mutual respect, fairness and mutual benefit, flexibility and pragmatism and consensus’ through equal and friendly consultation.”

The agreement does not specify locations, only stating that joint oil and gas exploration will be done “in relevant sea areas in the South China Sea.”

The Palace said at the time that since the sites were in Philippine waters, China would have to comply with Philippine laws.

China claims nearly all of the South China Sea, but the Permanent Court of Arbitration in The Hague, ruling in 2016 on a challenge brought by the Philippines, declared its sweeping claim invalid under international law and upheld the Philippines’ sovereign rights to fish and explore for resources in the West Philippine Sea.

The agreement seeks to establish two bodies to oversee the joint exploration activities: an intergovernmental joint steering committee and an interentrepreneurial working group.

The working group will consist of representatives from enterprises of the two parties.

The draft shows that China has authorized China National Offshore Oil Corp. (CNOOC) as the Chinese enterprise, but this part is left blank on the Philippine side.

The two parties’ entrepreneurs are to sign a contract based on the discussions.

The contract is to be performed upon ratification of the committee.

But there’s no mention of limits for joint exploration ventures under the Philippine Constitution, which states that the Philippine government “may directly undertake such activities, or it may enter into coproduction, joint venture, or production-sharing agreements with Filipino citizens, or corporations or associations at least 60 per centum of whose capital is owned by such citizens.”

The Constitution says further: “The President may enter into agreements with foreign-owned corporations involving either technical or financial assistance for large-scale exploration, development and utilization of minerals, petroleum, and other mineral oils according to the general terms and conditions provided by law, based on real contributions to the economic growth and general welfare of the country.” —With a report from Julie M. Aurelio