The nationwide poll, conducted from Sept. 15 to 23 among 1,500 adults, also found that net trust in China remained negative.

Reacting to the survey, Malacañang called its design “flawed” and questioned the timing of the release of the results.

Presidential spokesperson Salvador Panelo said the survey questions were “skewed” as these misled the public into thinking the government was not doing anything about the Chinese encroachment.

Panelo also said the survey’s release on Tuesday was “suspect” as this was the start of the two-day state visit of Chinese President Xi Jinping.

“This adds to the credence to the commonly held belief that polling firms could be wittingly or unwittingly used for partisan purposes,” he said in a statement.

Between June and September the proportion of adult respondents who said it was not right for the government to do nothing about China’s continued building and militarizing of artificial islands in the South China Sea rose from 81 percent to 84 percent.

SWS also found overwhelming support among Filipinos for getting back Philippine reefs that had been occupied by China.

Eighty-seven percent said it was important to regain control of the Chinese-held islets.

China has built ports for large ships and runways that can handle huge military planes at the biggest artificial islands.

On July 12, 2016, the UN-backed Permanent Court of Arbitration in The Hague ruled in favor of the Philippines, saying China’s claim to almost all of the South China Sea has no basis in international law.

President Rodrigo Duterte, who came to office two weeks before the ruling was handed down, set aside the arbitral court decision in exchange for aid, loans and investments from China.

At a press briefing, Panelo said the Philippines would join other nations that would unite to pressure China into respecting the ruling of the Permanent Court of Arbitration.

He, however, described the ruling as “useless as of now,” given that not a single body could enforce it. 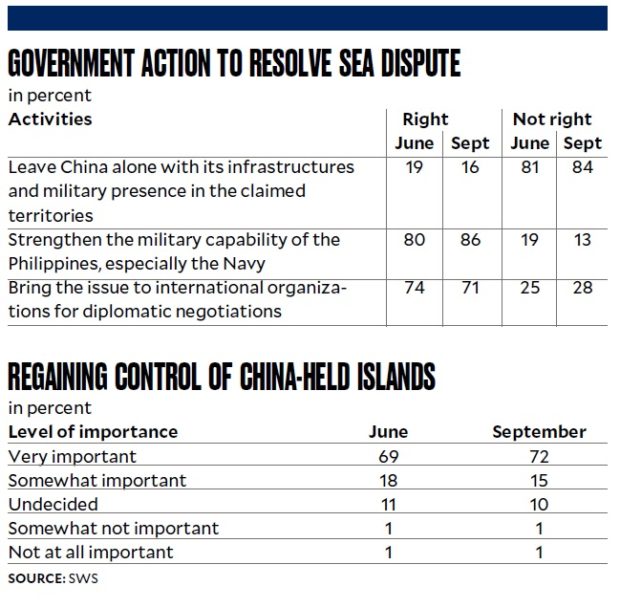 “[B]ut psychologically it benefits us because as far as the world is concerned, this is ours, not theirs,” Panelo said.

Results of the SWS survey also showed heightened public awareness of the West Philippine Sea conflict—from 81 percent in June to 89 percent in September.

Among those aware of the conflict, 27 percent had much trust in China, 43 percent had little trust, and 28 percent were undecided, resulting in a net trust rating (much trust minus little trust) of a “poor” -16.

In his statement, Panelo said “some questions were phrased to arrive at the results of the survey,” citing the question on whether it was right for the government to allow the military structures put up by China on the artificial islands.

He said the questions misled the public into believing that the government had not acted on the disputed areas.

The government, according to Panelo, has been protecting the country’s territorial claims and maritime entitlements.

Manila and Beijing have a bilateral consultation mechanism that helps strengthen cooperation of their common interests and amicably resolve territorial disputes, he said.

Panelo said Manila’s renewed ties with Beijing would be an opportunity for Filipinos to “know and understand China better.”

Sen. Aquilino Pimentel III defended the President’s decision to befriend China, saying it is a form of action to address Beijing’s militarization of the South China Sea.

Pimentel said the President made the decision to do something even if the Philippines had failed to stop China. But even the United States, he noted, could not halt Beijing’s activities.

This is why the President took a different tack, the senator said.

“So what did the Duterte administration do? We befriended China, our giant neighbor to the north, which fortunately also wants to befriend us,” he said.

Sen. Francis Pangilinan said he hoped the SWS survey findings would convince the administration to change its posture and defend the country’s territory and sovereignty instead of surrendering to China. —With reports from Inquirer Research, Christine O. Avendaño, Julie M. Aurelio and Leila B. Salaverria