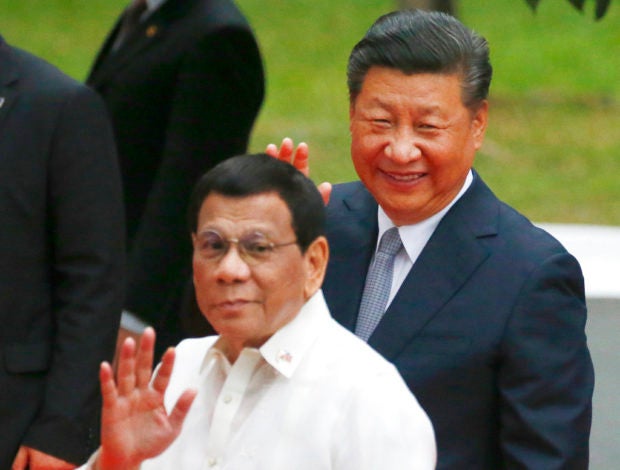 China and the Philippines on Tuesday agreed to cooperate for the development of energy sources in the South China Sea as visiting Chinese President Xi Jinping vowed that Beijing would work with Manila to “manage contentious issues” in the heavily disputed waterway.

“China and the Philippines have a lot of common interests in the [South China Sea]. We will continue to manage contentious issues, promote maritime cooperation through friendly consultation,” Xi said on Tuesday night, reading from a statement during his meeting with President Rodrigo Duterte in Malacañang.

Xi also promised that China would work with the Association of Southeast Asian Nations (Asean) for the conclusion of a code of conduct for all claimants in the South China Sea.

“[W]e will work alongside other Asean countries toward the conclusion of the code of conduct based on consensus within three years and contribute our share to peace and stability and to welfare in this region,” he said.

The Philippines and China signed 29 agreements on Tuesday night, including a Memorandum of Understanding on Cooperation on Oil and Gas Development.

Xi and President Duterte oversaw the signing of the agreements after they emerged from a bilateral meeting.

The energy deal signed was not the joint exploration agreement widely expected to be signed during Xi’s visit.

A source with knowledge of the oil and gas agreement said the deal contained “basic principles” and did not indicate the location in the South China Sea of the two countries’ cooperation.

In his statement, President Duterte did not mention the oil and gas development agreement, but said he and Xi discussed “mutual concerns on defense, security and maritime cooperation, law enforcement, transnational crime and strengthening of partnership in combating illegal drugs” during their meeting.

“I am pleased with the current positive momentum of the Philippines-Chinese relations,” the President said, adding there was now “deepening trust and confidence” between the two countries.

He said they also discussed China’s participation in his “Build, Build, Build” infrastructure program as well as the rehabilitation of Marawi City, which was destroyed in a battle for control between government forces and Islamic militants last year.

“With mutual respect, sincerity and adherence to the sovereign equality, I will continue to work closely with President Xi to deepen the relationship between our countries so we may together secure a peaceful and prosperous future for both our peoples and the entire region,” the President said.

The agreements signed by the two countries included cooperation in trade and investment, banking and finance, infrastructure, agriculture, education and culture, and people-to-people exchanges.

The Palace had not released copies of the agreements as of press time.

Xi earlier received a red-carpet welcome to Malacañang from President Duterte and his daughter, Davao City Mayor Sara Duterte, as he began his state visit to the Philippines.

After military honors on the Palace grounds, Xi and the President went in for their bilateral meeting.

In his welcome remarks, the President described Xi’s visit as “a historic occasion,” as it was the first state visit by a Chinese president to the Philippines in 13 years.

“Today is a landmark moment in our shared history. We have turned a new page and we are ready to write a new chapter of openness and cooperation,” the President said.

Xi thanked the President for the warm welcome, saying he was “deeply moved” by the sight of schoolchildren and other local people who lined the road as he made his way to the Palace.

“My visit will be a milestone in the history of exchange between our two countries,” Xi said.

Manila’s relations with Beijing stagnated over long-seething territorial rifts in the South China Sea until the President won the presidency in mid-2016 and rebuilt ties with China while often pillorying US security policies in a dramatic pivot.

The administration of President Duterte’s predecessor, Benigno Aquino III, brought the dispute with China over the strategic waterway to international arbitration and won, but China has ignored the outcome.

President Duterte has refused to immediately demand Chinese compliance with the arbitral ruling, which invalidated China’s sweeping claim to the South China Sea, where Beijing has transformed a string of disputed reefs into missile-protected island bases.

His rapprochement has fostered a new era of warming relations with the Asian economic powerhouse, with which he has sought trade and investment, infrastructure financing and weapons to fight insurgents.

While Western governments have sharply criticized the President’s brutal crackdown on illegal drugs, China has not.

But China has also been slow to open its purse to the Philippines.

The President was promised $24 billion in Chinese loans and investment pledges during his visit to Beijing in 2016.

But only a fraction, or $140 million, has been given so far.

Asked about it on Tuesday, the President’s spokesperson, Salvador Panelo, said the “bureaucracy” of both countries had to be considered, as both nations had stringent requirements for infrastructure projects.

“So it takes time. Hopefully, we will hurdle all these problems,” Panelo said. —With reports from Julie M. Aurelio and AP