SINGAPORE — President Rodrigo Duterte admitted Thursday that China is already in “possession”  of the disputed South China Sea and warned that any military exercises there would create “friction” and provoke the Asian superpower.

Beijing has a sweeping claims in the South China Sea, including parts of the natural resources-rich West Philippines Sea.

In an ambush interview before attending the Asean-India Informal Breakfast Summit here, Duterte was asked if he is in favor of holding military drills in the South China Sea.

He admitted that China was “already in possession” of the South China Sea and any military drill in the are may result to “friction” among claimant countries.

“ I said China is already in possession. It’s now in their hands. So why do you have to create frictions, strong military activity that will prompt a response from China?” he said.

Pres. Duterte says he’s against military drills in South China Sea cos it might provoke China: “As I said, China is already in possession. It’s now in their hands. So why do we have to create frictions, strong military activity that will prompt response from China?” pic.twitter.com/qwBYxwSEsv 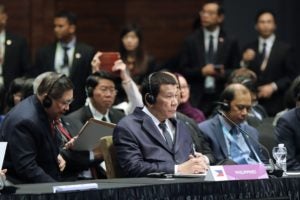 The United States has staged military drills in the South China Sea, asserting freedom of navigation in the disputed waterway.

READ: China warns US to avoid its islands in South China Sea

Duterte expressed worry that military drills in the South China Sea might provoke Beijing that could lead to war.

“I do not mind everybody going to war, except that the Philippines is just beside those islands. And if there’s a shooting there, my country will be the first to suffer. That is my only national interest there. Nothing else,” he said. /jpv