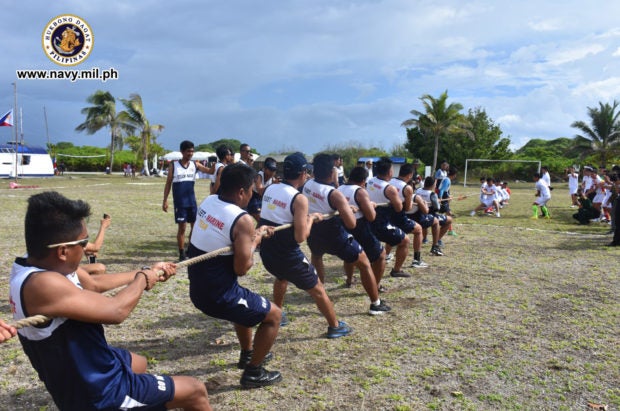 Filipino and Vietnamese soldiers battle in a round of tug-o-war on the Philippine island of Parola (Northeast Cay) last Nov. 10, 2018. PHILIPPINE NAVY PHOTO

Philippine and Vietnamese troops held joint exercises and played sports in the Spratly Islands in the West Philippine Sea (South China Sea), a sign they see as improving ties between the two naval forces.

“Interpersonal interaction like this intends to develop friendship, camaraderie and understanding between the two navies as well as enhance cordial relations while both engage on sports events and other field games, socio-cultural exchanges and interoperability exercise all compressed on a 1-day event,” said Lt. Rex Daclan, acting chief public affairs officer.

For the joint training activities, the two navies held communication and tabletop exercises to enhance their interoperability.

“The Philippine Navy and Vietnam People’s Navy personnel interaction provides an avenue for enlarging and sustaining the good relationship between the two navies and this will further enhance such understanding in the areas of maritime security, socio-cultural, economic and regional and international cooperation in the West Philippine Sea,” Daclan said.

Last year, Philippine Navy troops visited the Vietnamese-held Pugad Island (Southwest Cay) for similar purposes. The island was previously held by the Philippines but was seized by Vietnam in 1975.

Both the Philippines and Vietnam are claimants to the South China Sea, a strategic waterway and one of the world’s busiest shipping lanes. It is also claimed by China, Brunei, Malaysia and Taiwan.

China insists indisputable sovereignty over the South China Sea and has turned seven reefs and islands into huge military outposts in recent years. China’s claims were invalidated by the Permanent Court of Arbitration in the Hague in 2016 but the Asian superpower has refused to acknowledge the ruling. /cbb