Send-off ritual set this week at Wyoming air base; US ‘war trophies’ to be sent to PH in December
By: Joey A. Gabieta - Correspondent / @joeygabietaINQ
Philippine Daily Inquirer / 05:16 AM November 14, 2018 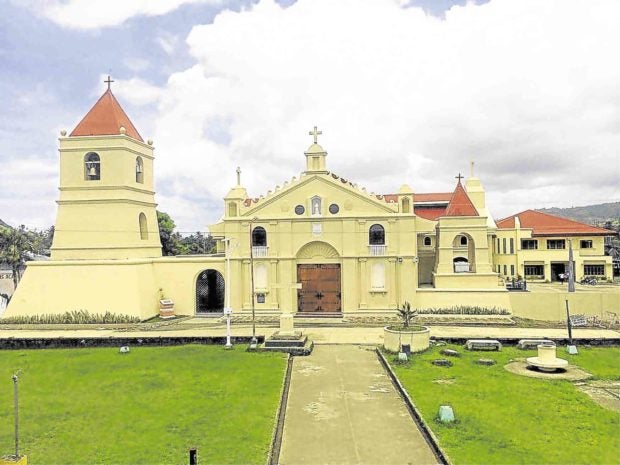 HISTORIC BELLS The bells seized by American soldiers from Balangiga town in Eastern Samar 117 years ago will be returned to the town’s Catholic church to replace replicas now on display. – CONTRIBUTED PHOTO

TACLOBAN CITY — Residents of Balangiga town in Eastern Samar province were in high spirits on Tuesday following news that the historic bells seized by American soldiers 117 years ago would finally be returned to their town next month.

The return of the bells is the “biggest Christmas gift for us residents,” said Joy Campanero, whose relatives fought in the Balangiga encounter on Sept. 28, 1901, considered the greatest single defeat suffered by American soldiers at the hands of Filipinos during the Filipino-American War.

In Malacañang, presidential spokesperson Salvador Panelo welcomed the latest development on the return of the bells.

“They were taken at the cost of bloodshed of thousands of Filipinos,” Panelo said.

He said the Palace would not further comment until the bells had been brought home.

“Given that the possession of the bells has not yet been turned over to the Philippine government, we are withholding any further comment on the matter until the last bell has been properly delivered to the country,” he said in a statement.

“In the words of the President himself: ‘It ain’t here until it’s here,’” he added.

Balangiga residents have been clamoring for the return of the bells that were taken by the Americans as war booty.

The bells were used by the Filipino resistance fighters to signal the attack on the American detachment in Balangiga on Sept. 28, 1901.

At least 54 American soldiers were killed and 18 others were wounded in the attack.

An outraged American Gen. Jacob Smith deployed 180 soldiers on Sept. 29, 1901 and ordered them to turn the town into a “howling wilderness” where every Filipino male, at least 11 years old and capable of carrying firearms, was killed while communities were burned down.

Not contented with the killing of thousands of Filipinos, American soldiers took the Balangiga bells as their war trophies.

Two of these bells are now at FE Warren Air Force Base in Wyoming while the other is at a US military facility in South Korea.

In August, US President Donald Trump directed his defense secretary, Jim Mattis, to sign a document that would pave the way for the eventual return of the bells.

“The target date [for the return of the bells] is still mid-December but there might be some delay because of the holidays in the United States and some other contingent factors,” said historian Rolando Borrinaga, a member of the committee on historical research of the National Commission for Culture and the Arts. 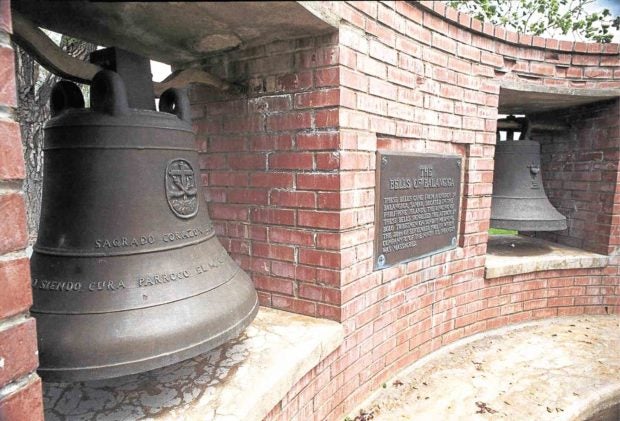 WAR TROPHIES Two of the three Bells of Balangiga, considered war trophies by the United States, are displayed at FE Warren Air Force Base in Wyoming. The third bell is with the US Air Force in South Korea. —AP

But Borrinaga, who has been involved in the campaign for the return of the two bells for 24 years, said a send-off ritual was scheduled on Nov. 14 (Nov. 15 in the Philippines) at FE Warren Air Force Base in Cheyenne, Wyoming. He said the turnover ceremony would be held later in the Philippines.

According to Borrinaga, the third bell at Camp Red Cloud, a US camp in Uijeongbu City, South Korea, will also be returned.

“It was always understood throughout this campaign that the Balangiga bells would be returned to the church of their origin, in the Parish of San Lorenzo Martir,” he said.

Borrinaga said the repatriation of the Balangiga bells was a result of negotiation and “influence of the veterans’ community, particularly on the American side.”

“The recent campaign was really a US veterans to US veterans issue, a wide educational process of information for those not in the know that the return of the bells was the right thing to do,” Borrinaga said.

The return of the bells will “certainly lead to some closure,” Borrinaga said.

Campanero said both the town government and the Balangiga church have decided to put the bells on display in a small park on the church grounds. The bells will eventually be returned to the belfry of the Parish of San Lorenzo Martir. —With reports from Christine O. Avendaño, Leila B. Salaverria and Darryl John Esguerra