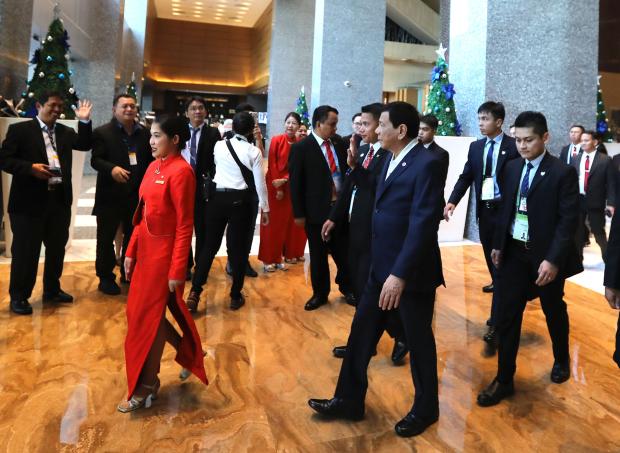 President Rodrigo Duterte interacts with his supporters on the sidelines of his attendance at the opening ceremony of the 33rd Association of Southeast Asian Nations (ASEAN) Summit and Related Summits at the Suntec Convention and Exhibition Centre in Singapore on Tuesday, Nov. 13, 2018. (Photo by VALERIE ESCALERA / Presidential Photographers Division)

SINGAPORE — President Rodrigo Duterte on Tuesday assured Southeast Asian leaders that the Philippines remained “committed” to the early completion of a sea code in the South China Sea and called for self-restraint in the disputed waterway.

In his intervention during a working dinner with regional leaders here after the opening of the 33rd Association of Southeast Asian Nations (Asean) Summit, Duterte said the Philippines “is prepared to do its part” as the country coordinator of Asean-China Dialogue Relations until 2021.

“We are committed to work with all concerned parties in the substantive negotiations and early conclusion of an effective code of conduct,” he said.

The sea code of conduct, which remains under negotiation between the 10-member states Asean and China, is expected to ensure peace and stability in the tension-filled South China Sea.

Duterte reaffirmed the Philppines’ “commitment to the full and effective implementation of Declaration on the Conduct of Parties in the South China Sea.”

“This includes the peaceful settlement of disputes, the exercise of self-restraint, and the freedom of navigation and overflight in accordance with international law, especially the 1982 UN Convention on the Law of the Sea,” he said.

China claims nearly the entire South China Sea, including parts of the West Philippine Sea, but the Permanent Court of Arbitration in The Hague invalidated this in July 2016, reconizing the Philippines’ sovereignity in the area.

The President has set aside the ruling and has chosen to develop warm ties with Chinese President Xi Jinping, whom he considered his “good friend.”

Some Asean leaders have pushed for stronger action to confront China’s aggressive behavior in the South China Sea following its continued militarization and reclamation in the area.

Leaders of the Asean-member states and Chinese Premier Li Keqiang are set to meet on Wednesday for the Asean-China Summit, where the South China se dispute is expected to be tackled.