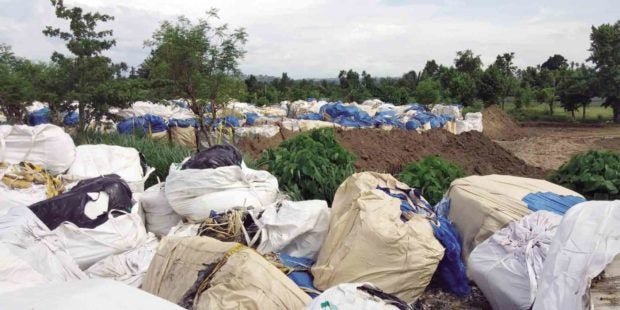 CAGAYAN DE ORO CITY — An environment group last week called on authorities to return the tons of trash from South Korea that it said were dumped in the Philippines.

It also urged the government to stop importing plastic waste from any country.

“Why do we keep on accepting garbage from other countries when we know that our country’s plastic waste, which are literally everywhere, are already spilling to the oceans and endangering marine life?” she said.

Lucero said the Philippines should ban garbage imports and demand that developed countries, as well as manufacturers of plastics and other disposable goods, take full responsibility for their products throughout their whole life cycle.

“The illegal garbage shipments from Canada, misrepresented as recyclable plastic scraps, are still in our country, a stinking reminder of how disadvantageous and unjust global waste trade is,” she said.

In an alert order issued on Oct. 25, Joel Pinawin, supervisor of the Bureau of Customs’ Intelligence and Investigation Service in the region, said trash from South Korea was declared as “plastic synthetic flakes.”

The shipment arrived on July 21 at Mindanao Container Terminal (MCT) in Tagoloan town, Misamis Oriental province, from South Korea on board the MV Affluent Ocean.

“When you say plastic flakes, it should be all plastic flakes,” John Simon, MCT customs collector, said. “But we saw wood and other materials,” he added.

But a Phividec Industrial Authority (PIA) official had issued a separate statement in August this year, saying Verde Soko had complied with government regulations.

It was the reason the PIA cited for approving the construction of a recycling plant in an industrial zone in Tagoloan, which PIA manages.

The imported materials were described as “nonhazardous segregated processed plastics.”

Jara said the PIA entered into a deal with Verde Soko in June for the “sorting and processing of plastics for briquettes and plastic resin for production of plastic pallets.”

The PIA, he added, was “satisfied that the company had complied with their commitments in the deal.”

Verde Soko’s recycling facility is on a 4.5-hectare lot in the PIE complex at Barangay Santa Cruz, Tagoloan.

In an earlier interview, Jara said the PIA would help firms like Verde Soko get permits prior to operations in the economic zone. He said the importation of recyclable materials was approved by the Philippine Embassy in South Korea.