Duterte to bring up sea row, OFW rights at summit 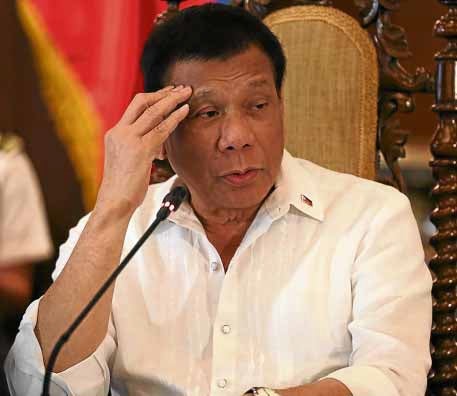 BUSY WEEK President Duterte is attending the Asean summit in Singapore and the Apec meeting in Papua New Guinea this week. —JOAN BONDOC

The President arrived in Singapore on Monday night to join other Asean leaders in annual discussions that will also be participated in by the bloc’s dialogue partners, including the United States, Japan, China and Russia.

US President Donald Trump is skipping this year’s Asean summit. He will be represented at the meeting by US Vice President Mike Pence.

The meetings might be held on Wednesday, according to Philippine Ambassador to Singapore Joseph del Mar Yap.

Yap said the President was expected to discuss with the other Asean leaders matters of great importance to the Philippines, including migration and the territorial dispute with China in the South China Sea.

Yap noted that the 10-member Asean was negotiating a code of conduct for claimants in the South China Sea, four of which belonged to the Southeast Asian bloc.

The Philippines, Brunei, Malaysia and Vietnam have overlapping claims with China in the South China Sea.

But China claims nearly the entire sea, which is crisscrossed by vital sea-lanes where $5 trillion in global trade passes every year and where islets, reefs and atolls are believed to be sitting atop vast energy reserves.

The UN-backed Permanent Court of Arbitration in The Hague, ruling in a challenge brought by the Philippines, invalidated in July 2016 China’s sweeping claim.

The tribunal declared China had violated the Philippines’ sovereign right to fish and explore for resources in the West Philippine Sea, waters within the country’s 370-kilometer exclusive economic zone in the South China Sea.

China, however, ignored the ruling and proceeded to build artificial islands on seven Philippine-claimed reefs in the Spratly archipelago, topping these with ports and airstrips that have runways that could receive large military planes.

Asia’s economic and military powerhouse refuses to internationalize its disputes with the Asean nations, insisting on bilateral talks to settle the territorial rows.

Asean is pressing China for a code of conduct that could prevent the disputes from erupting into conflict, such as the 1988 naval skirmish between the Vietnamese and Chinese navies in the Paracels, where China had wanted to build a weather station.

Many Vietnamese died in the confrontation, which marked the start of the Chinese occupation of islands in the Spratly archipelago.

Earlier, Philippine Assistant Foreign Secretary Junever Mahilum-West said the Asean leaders would likely take up the latest developments in the territorial dispute but she could not give details of the expected discussions.

The three-day meeting is being held at the Suntec Singapore International Convention Center.

From Singapore, the President will proceed to Port Moresby, Papua New Guinea, on Wednesday for the 19th Asia-Pacific Economic Cooperation (Apec) Meeting.

Papua New Guinea is hosting the meeting for the first time since joining the forum in 1993, according to Foreign Undersecretary Ernesto Abella.

Abella told reporters in Manila on Monday that the President would join a dialogue in the summit of leaders of the Apec Business Advisory Council.

The President will also meet with leaders of the Pacific Islands Forum, Abella said.

“The President joins other leaders in affirming commitment to an international rules-based regime, support of the multilateral trading system embodied by organizations like the World Trade Organization,” Abella said.

He said the President would also meet with Filipinos in Papua New Guinea during his visit there.

There are 40,000 Filipinos working in the South Pacific nation, many of them in skilled services, he said. —With a report from Christine O. Avendaño